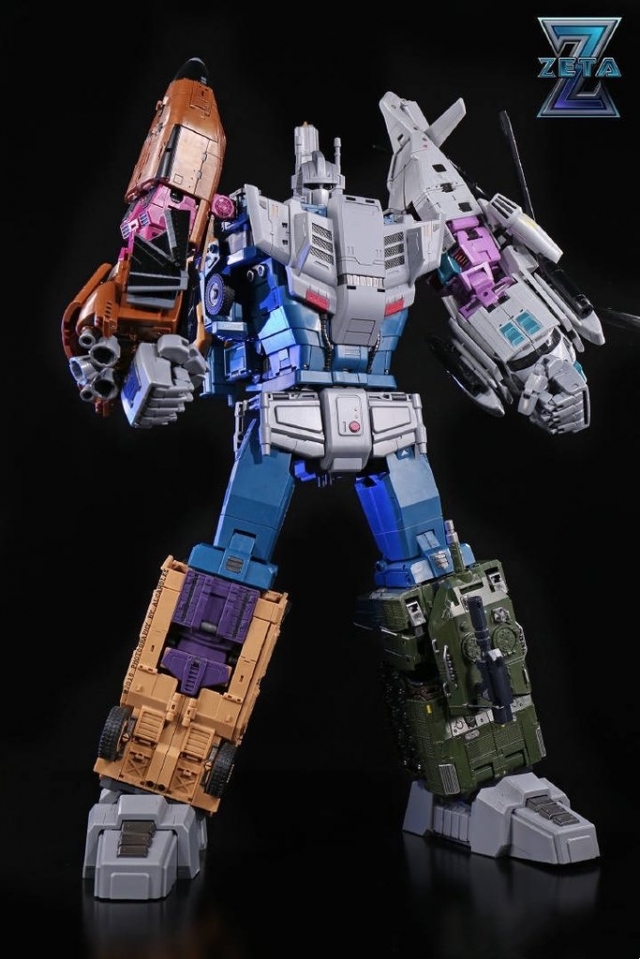 Nothing beats a massive combiner fighting its way through an even bigger battle. What could be better than creating a display for your collection of one of the biggest, most powerful combiners around? The mighty Armageddon from Zeta Toys is certain to bring an end to any big battle—and this gift set is a worthy conclusion to your search for the perfect combiner. Armageddon isn’t a mere single robot—he’s five robots that form into one massive combiner!

Zeta Toys’ Armageddon is formed with five individual robots, all of whom you’ll receive in this set—Take Off ( ZA-01), Whirlwind (ZA-02), Blitzkrieg (ZA-03), Uproar (ZA-04) and Racket (ZA-05). Four of the figures stand approximately 8.3” tall in robot mode, while a fifth figure—the maniacal Blitzkrieg—towers above his compatriots at 10” tall in robot mode. Each of these figures is approximately masterpiece scale. Featuring a space shuttle, helicopter, tank, missile vehicle and humvee alternate modes, these robots are ready to battle on all fronts. When they combine, they form the massive Armageddon—one of the largest combiners in existence at approximately 22” tall in its robot form, also reaching masterpiece scale.

Gorgeous, inspired color schemes work hand in hand with rugged plastic construction to create a figure (or figures if you prefer individual modes) that will stand out in any collection. Add amazing articulation and engineering to the mix and you have perhaps one of the coolest combiners available today. The best part? Transforming and combining the figures together couldn't be simpler.

Armageddon comes  with plenty of weapons, accessories and the parts you need to combine all of the robots together.