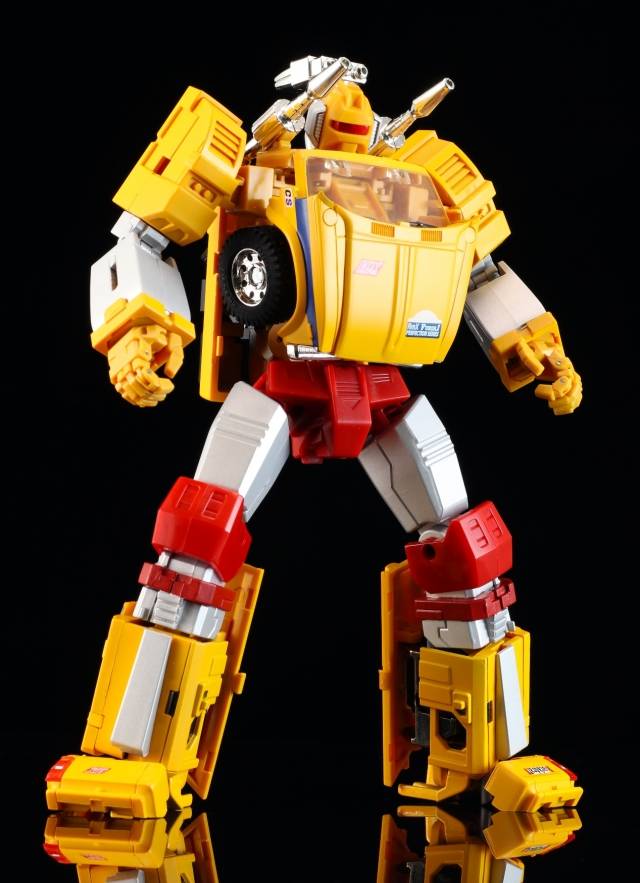 Don't miss out on this amazing figure and pick up your Ocular Max PS-06R Terraegis Rally Convention Exclusive today from Toygeek—your one stop shop for your 3rd Party collecting needs.

So so desperate 4 a G1 Trailbreaker, specifically the XTbots Aegis but it was soldout of its semingly limited run pretty quickly, figured Ftoys could be years awaiting. I went against my known judgement of the o-max Terragis mold, uuuugghhh i remember thinking last year, "why are they recoloring this horrible figure?" My conclusion was mmc ocular max was getting a fanstoys-style rep realky fast for really just 2 molds/figures-mirage, inferno thats really it, those two. It seemed to me their rep was only due to reformatted, thise two figures which are great yes. But i had terragis and hated it, no paint, too skinny, too short, bad tf engineering.
I thought since it kept being repainted into exclusives that maybe they fixed the horrible tformation from top 2 bottom nope! It actually was worse on this nicely finally painted version, but the above reveiw reads like a true skullface, emgo, truthfull warning against waisting, yes i said waisted money on this thing. Because he isnt Trailbreaker at all in any of its mysterious versions.
Its my own fault i already knew what he was, even though since i had preordered terragis black he came in botmode vertically w/a cheap baggy filled w/ all his accessories, parts chipped off, chrome &paint chipped n broke pegs left&right. Dont spend your diaclone money on it, its not worth it, eventually another 3rdP will recolor tbreaker's mold. Heres hoping Fanstoys is as good as the xtbots version, i hope so cuz speedbump is almost worse though i could get half done w/him, i just received a defective one not from this site. He looked great all the way done to his calves, yet again. Try your luck right now other than o max's badcube has the only other mp option available anywhere.
I am going 2just wait 4 Ftoys Outrider, all in one i think no attaching everything.

One of my favorite looking Transformers, bot or vehicle. The collapsible hood for the chest is great, and the paint and printed sections are well done. Now that all the positive thoughts are over, lets get to the bad stuff, because there is a lot of it.

QC and engineering have major problems. Most parts not screwed in will fall off. Ankles and toe joints are very floppy. Tightening the screws help only a little bit. The feet are on a side tilt rocker, but not up/down joint. The toes only tilt downward, so leaning, or dramatic poses will be further limited. The toes are hollow so very little will actually touch the ground. Anything you do to help with traction will be on the base of the mostly stationary feet. Prepare to use lots of sticky tack to make anything beyond a basic standing pose.

At the waist, the leg joints have ratchets, but are still floppy in between clicks. Legs easily have 2+ inches of loose movement due to junk ratchets. Leg ratchets are also too soft. Some joints (elbow and knees mainly) are extremely tight which normally would be fine, but all the other loose parts & tabs (shin area especially) get undone easily when you move those tighter joints. There is no knee swivel, so your posing options now get further limited due to engineering instead of a QC problem.

The paint and printing are really good where applied, but the non painted yellow plastic looks ugly by comparison. Part of the hood (one of the little circles at the top on mine), hands, shoulder and neck areas are not painted and really stand out.

The directions can be slightly vague. It shows a lock icon, and then an arrow for what section separates from the rest, but you have to be very careful because pulling apart as implied by the directions will likely break it.

Exclusive or not, this thing is a piece of garbage. It only gets 2 stars because it looks nice. The good news is that this figure stopped me from splurging on their Trailbreaker and Hoist. I will likely be avoiding MMC in the future due to this figure.