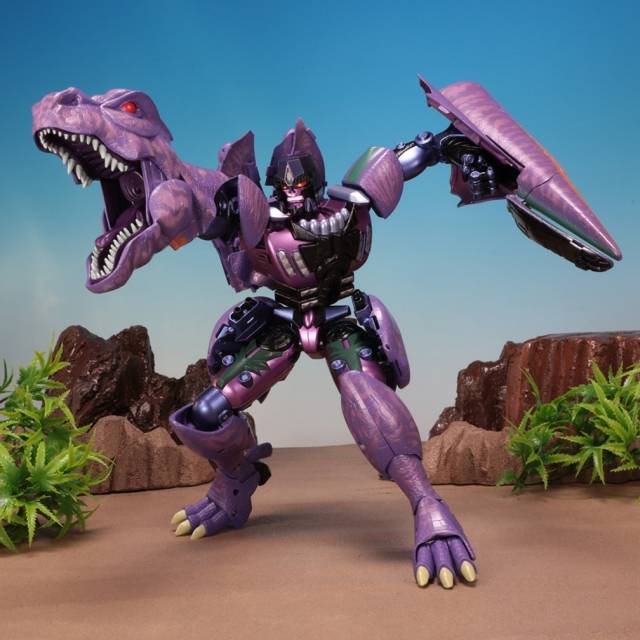 Celebrate the 20th anniversary of Transformers: Beast Wars in style with Takara Tomy’s Masterpiece MP-43, featuring Beast Wars Megatron! Paying homage to the ground breaking cartoon, this Masterpiece figure is one villain you won’t want to miss out on adding to your collection!

As he towers above all the other creatures of the forest in full Masterpiece scale, MP-43 Megatron transforms into a terrifying, fearsome Tyrannosaurus Rex! The alt mode not only looks amazing, but maintains show accuracy in both design and execution. In robot mode, MP-43 Megatron looks sleek and futuristing, with one of his hands even doubling a T-Rex mouth.

An array of alternate faces—for those times when his typical villainous visage isn’t enough—amplify the figure’s personality and provide a variety of possible poses or displays. He’s not exactly prehistoric, either. MP-43 Megatron is armed to the teeth with weapons and accessories for his robot mode. In addition to his hunting rifle (from the episode “Call of the Wild”) and a laser energy blast effect, Megatron comes with adapters that allow him to use the display base for another Masterpiece figure, MP-41 Dinobot.

And because dental hygiene is so important to an evil leader of his stature, MP-43 Megatron comes equipped with a tiny toothbrush that he can use to keep his dino arm’s teeth polished—just like he did in the show from time-to-time! Rounding out the proceedings are multiple attachable armor parts and the unnerving ability to switch the eyes from an iris to a blank stare, giving MP-43 Megatron the fiercest look of any figure in your collection.

Don’t wait for this deal to go extinct; Take advantage of our competitive prices and order stacking and pick up your Takara Tomy Masterpiece MP-43 Beast Wars Megatron today, only at Toygeek—your source for everything Transformers! 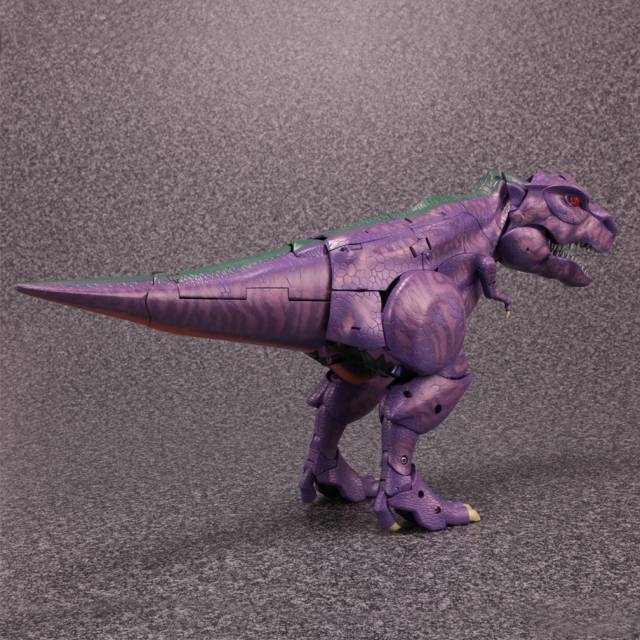 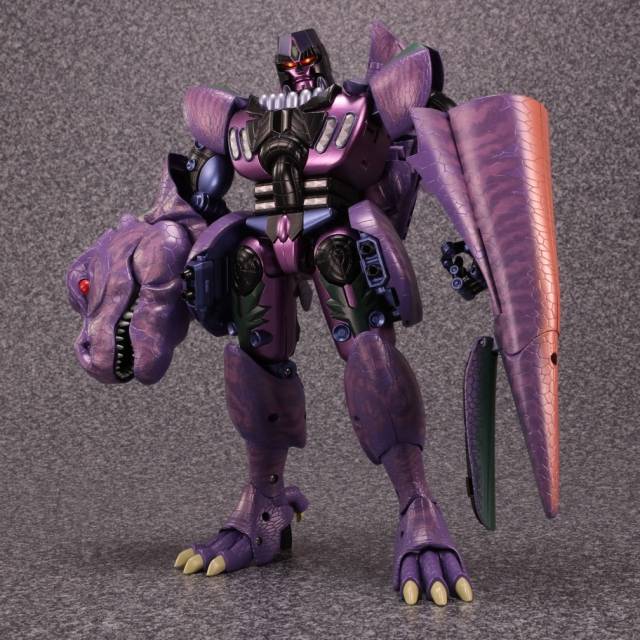 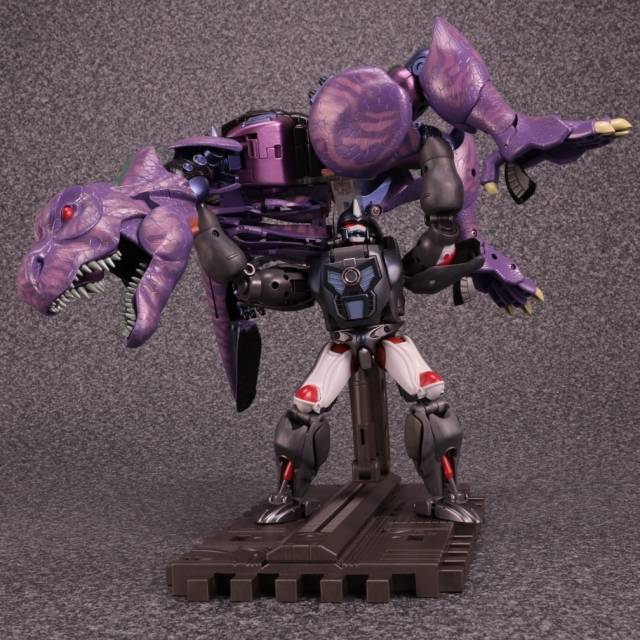 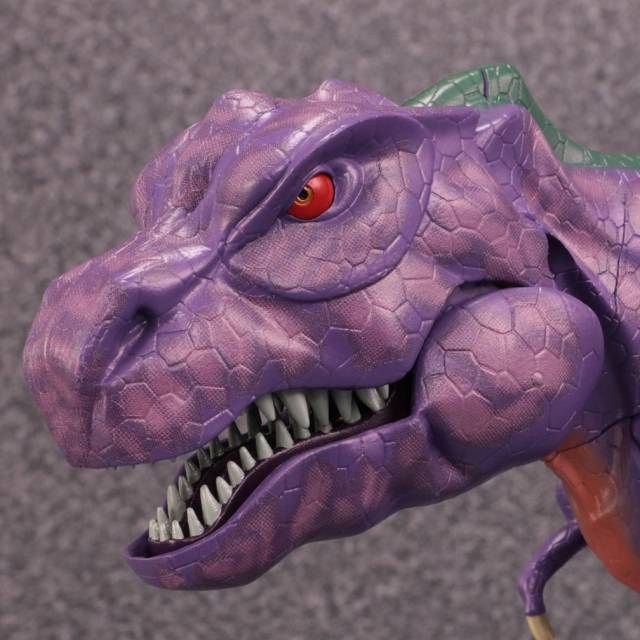 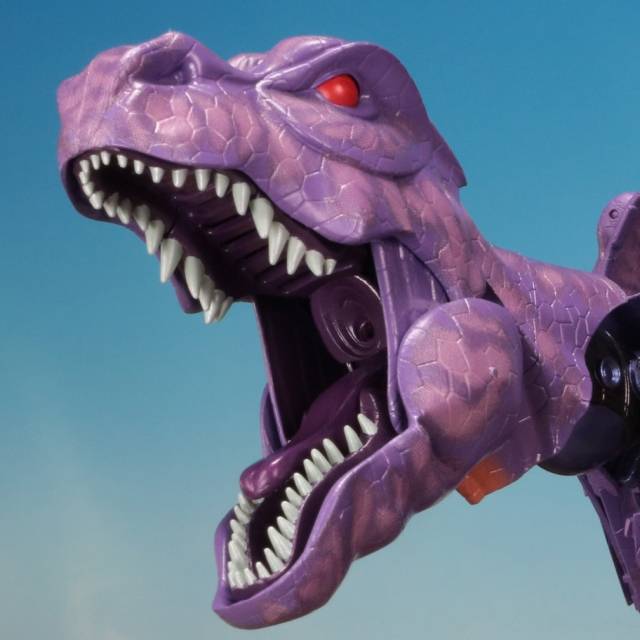 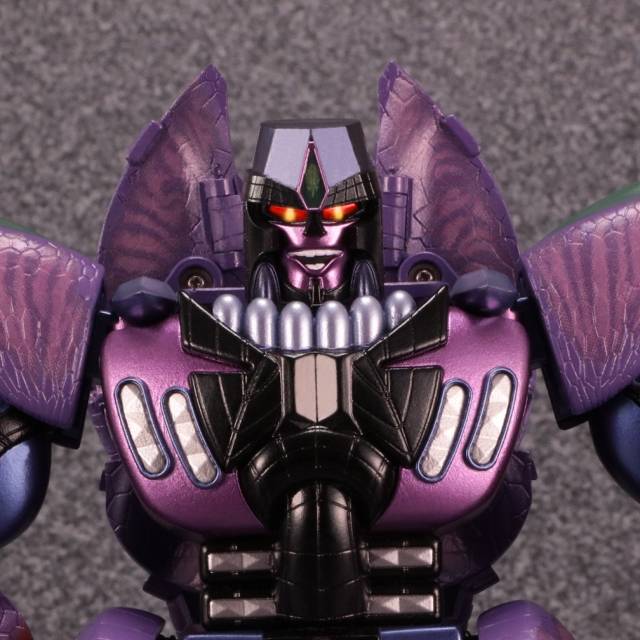 big, intimidating, and besides the loose waist, solid all around. great detail too.

Like my MP-36 I love this figure. Though I keeping him in his T-Rex form since a buddy of mine with his own had breakage and am fearful the same will happen, but I might give it a try. In the mean time the voice clips are hilarious, though I'm not quite sure as too why some clips make him sound like a anime girl. The pricing is acceptable unlike the MP-44

Amazing piece of engineering to make the figure so close to what was seen on the show.

I'll admit, at first, I had a few doubts about the price. But those concerns all went away as soon as I opened the box. His robot and beast modes are show-accurate, his T-rex head's eyeballs move, and while his robot mode wings feel a little delicate and his waist swivels a bit too easily, everything else more than makes up for it. I am particularly fond of his 'Yes' smiling face paired with the hunting rifle.
My one complaint, my ONLY complaint, is that there's no rubber ducky accessory.
Still, he was worth every penny, yes.

I am a fan. he is good figure. I mean its a T-Rex. big in both forms. only down fall is he is a little light. But he is show accurate. wish he was a little cheaper but go buy him. .

Upon purchasing this big boy, I suffered from buyers regret until he arrived. With that price tag, that's easily justified. All concerns went away upon opening his box.

The waist swivel is pretty heinous though. If it leans forward, even the slightest bit, it rotates.

The beast mode is spectacular and as close to the show presentation as I can expect. Same goes for the robot mode. Transformation is easy enough and intuitive. While nothing on my figure was broken (early reports indicated fragile parts) some tabs and hinge points on the back/sides showed stress marks from factory transformation. After transforming 4 times, still no breakage with extreme care. I love this figure and could see it being perfect at the price range of $275-$300. But, given this is the best that will likely be produced for a MP BW Megatron, might as well pay the extra and get it instead of regretting not purchasing it.

This is truly a masterpiece Beast Wars Megatron. Even being a devoted beast wars fan I was hesitant on the price, but after getting him in hand....so worth every penny. The looks are perfect, with updates. The transformation brought back memories and very fun. I'm looking forward to getting batteries and enjoying the features.

Yes he's a dang good figure, but I don't think he's quite as jawdroppingly amazing as some think of him. He looks amazing, bar none. It just comes down to the fact that he's got a couple of quirks that are really disturbing. His waist rotation is friction-based and quite loose. Transforming him from rex to bot mode can cause you to feel the fear of Megs himself in your heart as you split the back as it's so difficult to pop... While doing so I really feared for my $300 something figure's health even as I was watching a video on how to best split the dang thing. His torso is also extremely tight when trying to slide it up during transformation.

Is he worth it in the end? Yes! Is he going to put the fear of the DJD in you while transforming him? Oh yes!