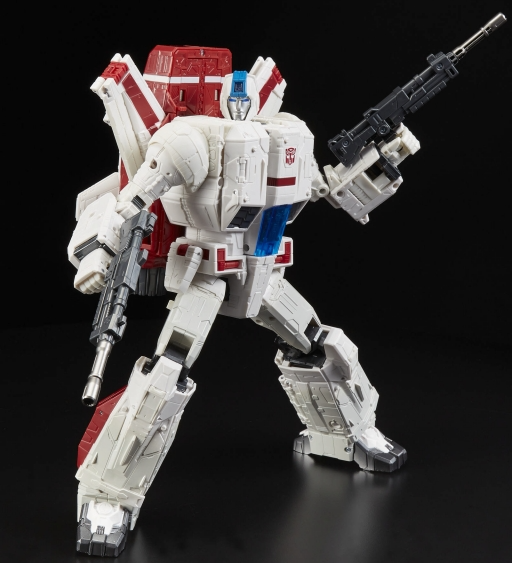 Transformers War for Cybertron Siege Chapter WFC-S28 Jetfire is Commander Class Scale and stands approximately 11.0 inches tall in robot mode.  WFC-S28 Jetfire transforms from Jet to robot and back and is screen accurate to the Transformers: War For Cybertron Siege Chapter Netflix Animated Series.  Each War For Cybertron figure jumps out of the big screen and into your collection with a high attention to detail and accurate color schemes reflecting their appearance in the Transformers animated series.

Build the ultimate battlefield with Siege figures. Siege plunges fans into the epic fight to survive on the final day of the Autobot and Decepticon battle to control Cybertron. The Decepticon resistance army and the Autobot counter-resistance fighters gear up with the C.O.M.B.A.T. (Cybertronian Omnifuctional Modular Battlefield Assault Tech) System, the universe's most advanced modular weaponry- including the scientific Autobot army captain and air guardian, Jetfire. 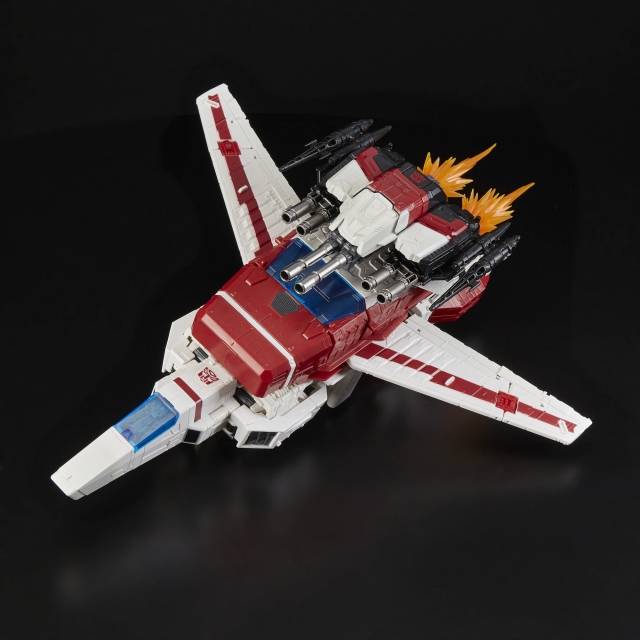 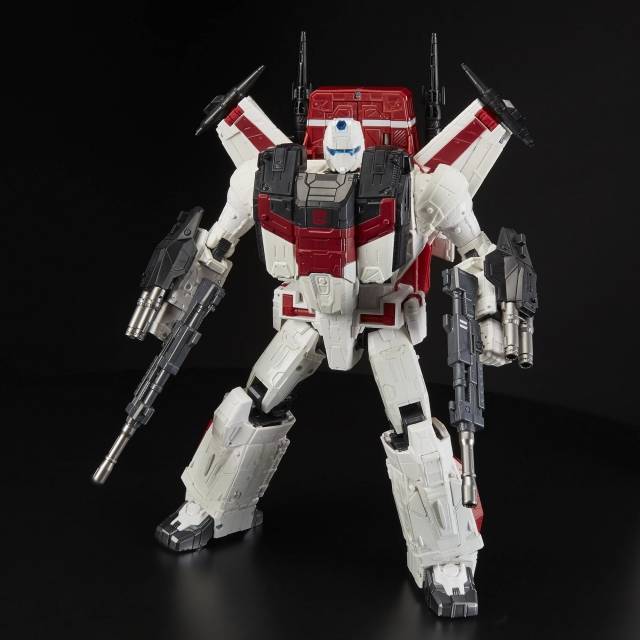 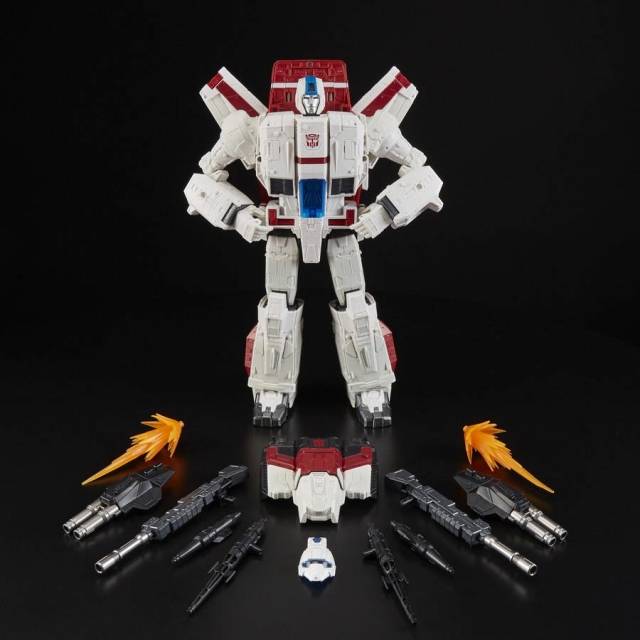 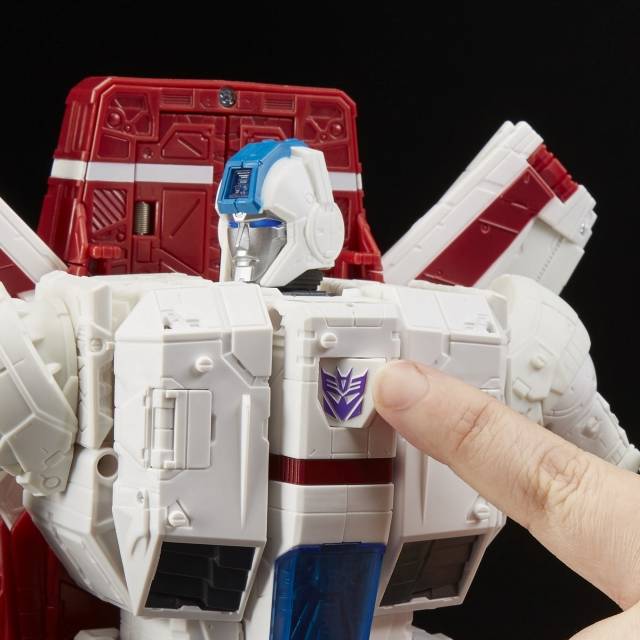 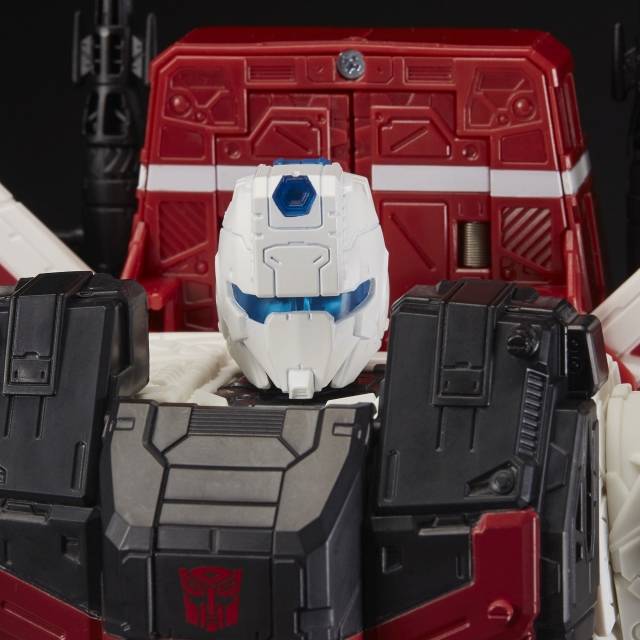 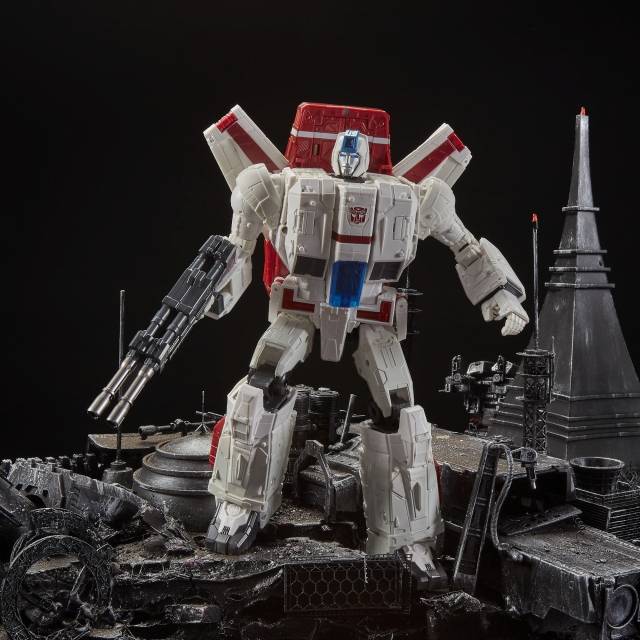 Just got the Jetfire toy like last month and I am so glad to finally get this figure. The hands get a little loose but I can handle it. I am glad this is a great Jetfire figure. Also, love the add on blades. Looks wicked. The armor and guns are amazing.

Pro: The figure's box was well packaged and protected for shipping; no scratches, dents, or discoloration. Most joints are stiff enough for action poses. Nice molding detail and color scheme.

Skyfire has always been my childhood favorite. Had the original G1/Macross version but this is what I always wanted - something that was true to the cartoon.

I usually despise modern transformer toys because of the cheap quality but this one is superb. Not perfect but it looks and feels better than most.

Truly an epic figure about time hasbro got their stuff together!

Box came in great condition. The toy itself has dark scratches on the paint, but I think that gives him more character ;3c

If you can't muster the money for a Fans Toys Phoenix, then this is your next best option for your MP collection.

This thing is my favorite thing that hasbro has ever produced. The figure is beautiful and the quality is good too unlike a lot of hasbro things. The entire figure is engineered well and is big and has a lot of playability. The symbol flipping feature is cool.

This is an absolutely wonderful figure and the best Hasbro has done in years. He looks feels and has an amazing presence in my MP collection and is completely affordable and FUN! 5 Star recommendation.

This is the best and most inventive version of jetfire/skyfire I know to exist the siege line is largely doing an amazing job at capturing the G1 look and adding something new to it. In this case it is especially great because there are nods to both the Skyfire G1 autobot and The Jetfire G1 toy. Really really impressive.

Best skyfire\jetfire rendition out there.

Hasbro really came through on this! A beautiful looking G1 toon accurate Skyfire, you can call him Jetfire if you want. The reversible Autobot/Decepticon symbol is a great feature! The size, blast effects and articulation all come together real well. I actually got him for my Masterpiece collection. He sizes well for the most part to be honest, save your money if tracking down a Fans Toys Phoenix. A steal at the price for what you get.

I won't bore you with back story, but I now hold in my hand a very well articulated, designed, sized figure. One that I have wanted for a very long time. The transformation for the first time was like transforming my first Robotech jet. My excitement was off the charts. Joints are nice and stiff but not so stiff that you fear beaking it. Lots of well thought out placement for connections and limbs. The wings have a few small parts the could break easily if mishandled by little hands. The jet form took my breath away and that was without the weapons. Once you add those bad boys it screams kick ass.

nice ratchet joints; enjoyable transformation with a lot of extra gemics and weapons! I've been waiting over 30yrs for this!! the chest plates are soft plastic but no so flimsy it will bend or break! Both modes are just wonderful; He is one of the "unicorn" transformers I never thought they would make both avail and affordable..GET THIS GUY NOW!!

Siege Jetfire is a phenomenal toy and a breathtaking display piece. His transformation pulls off some clever tricks without being too complicated. The added armour pieces are mostly forgettable but there's nothing wrong with having some extra guns lying about. If you like Transformers: Siege, you will love this figure.

Not much to say about this other than it's a big, beautiful bot that looks good on the shelf next to the other siege figures in my collection. All of the blast effects that come with it are pretty nice as well.

He just simply put is Jetfire from the animated series. 100% accurate to the T!!!... The perfect addition to my collection and would be to yours.

This is a very cool figure. He is a spot on homage to the g1 animation model. So I call him skyfire. His armour set is homage to the g1 toy of jetfire. He is smooth on transformation except for the arms. They are not fun to transform. Very stiff. Some points are a softer almost flimsy plastic. Be careful.

My Dad has the original G1 Jetfire and when this guy was finally delivered he said â€œYou look like how I looked when I got mine on Christmas morning.â€ Heâ€™s got the G1 Cartoon look, which is amazingly accurate, and the â€œbattle packâ€ makes him look like the G1 toy. There are so many features on this guy. Took my Dad and I around an 1hr and 1/2, pretty sure there are more we havenâ€™t found yet. If youâ€™re a Transformers fan, a must have for your collection