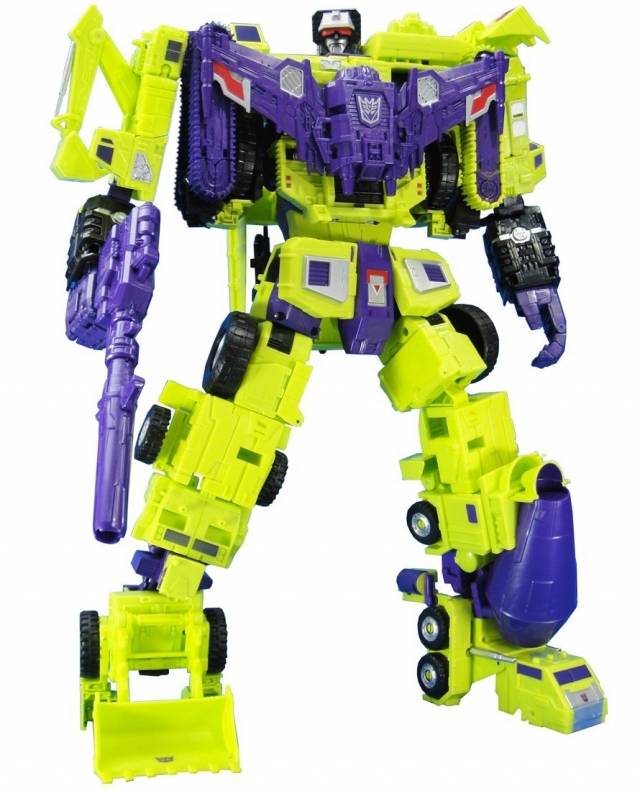 This is the Japanese version of the US release features improved paint apps, purple hands and mixer barrel and more accurate colors as well as weapons for all 6 figures!

Transformers Unite Warriors is the Japanese exclusive release of Hasbro's Combiner Wars Series.   Unite Warriors figures come packaged in all one package as opposed to individually and feature unique colorations, and releases of the US figures only released in Japan.  Figures are also retooled to be more screen accurate and add more articulation to some of the figures.

I got into collecting the current Transformer line pretty late. After Combiner Wars had wrapped up. I really wanted Devastator but the US release doesn't have elbow joints on the individual figures. That was a deal breaker for me.

So I splurged on the Takara version. I don't regret it. It's big, it's green, its heavy. Paint apps are nice, transformations are pretty good and man, this one looks amazing on the shelf next to Fortress Maximus and Trypticon. Takara version comes with weapons for the individual Constructicons. This is the grand daddy of the main line combiners, and it shows. It's well engineered and the quality is really great. Maybe not $150 3rd party great, but it's up there. If you are on the fence, I recommend this collection.

He is HUGE and impressive. The engineering that went into this guy is outstanding, and Takara Tomy has gone the extra mile and made little changes to Hasbro design that individually seem small, but the overall effect is amazing.

Yes, Longhaul is oversized, but by making him so, the complete Devastator has the right proportions, unlike so many Combiner/ Unite toys (which tend to have ape arms with flimsy elbows).

The only problem that I have with this figure is that it makes my Predaking and Bruticus look cheap and off scale/ proportion in comparison.

The plastic of the figure looks cheaper than masterpieces'. The Constructicons are too shabby to be displayed by themselves, the figures are only worth if combined. The big guy looks cool from far, but he has not much details, the pieces fit together leaving some spaces and seems fragile. His head can't turn up and down, his joints are stiff... I expected more about Takara's Devastator. I would rather go for Generation Toy's Gravity Builder now that I have Takara's.

I got this figure as a birthday gift and absolutely love it. it is not quite masterpiece quality but it is definitely worth owning. I like the improvements over the Hasbro version like new joints and paint . The guns also make for a good display in robot modes. Overall a value for this set of 6 figures which can cost between 500 and 600 for third parry

Takara upgrade on this combiner really knocked this thing out of the park! I love the detail and all the stances and positions this figure can actually make. The joints are very strong and solid to be made entirely out of plastic, and in Devastator mode these 6 guys hold together very well.. If you have Green Giant or Hercules (which wasn't even close to G1 accurate) I feel for you cause this guy is everything Devastator was supposed be. To bad we had to wait 30 yrs for them to get it right though...

I was to say the least blown away. I'm a G1 generation guy who grew up watching the G1 cartoon, and to say that this captures the G1 Devastator would be an understatement. There are some subtle things that could be better but overall, I'm beyond pleased with my purchase. Also, he is massive. Really captures the giant size that Devastator was in the show.

In short, this guy is awesome. Huge, imposing, and easily the most faithful of all Devastators and wannabe Devastators ever made. It's also twice as expensive as the Hasbro version, with a variety of small improvements, most of which are devoted to improving the individual Constructicons with a few cosmetic improvements to the combined mode here and there, which mostly amounted to making more of him purple and giving him a new head.

Is the toy perfect? No. Long Haul is way oversized and off-model in concession to the combined mode, and Mixmaster's vehicle mode is wrong for no reason at all. The toy attempts to break the combiner pieces into weapons but the 'swords' made from the chestpiece fins are so unconvincing you might as well keep them stored them on Long Haul's back. Which leads us into the good parts:

- All parts and guns, including the new individual handguns, store or can be carried in all three modes. All the combiner parts store in Long Hallâ€™s bed in vehicle mode. In theory they can also be kept on his back while he's in robot mode, but in practice that makes him tip over backwards and aside from the chest fins you might as well have the other bots carry their share.

- It's HUGE! Masterpiece sized in combined mode, allowing for the variances in show scale, and yet its components are only about the height of a masterpiece autobot car. That's almost size-shifting there. It should also be noted that there's no significant die cast in this guy, which some might count as a minus but it keeps his combined mode weight manageable.

- The toy is relatively easy to transform and combine, and holds together very solidly once together. None of his connections points act as joints, eliminating that point of weakness.

- Extraordinarily screen accurate. The biggest difference to the combined mode are the treads being moved to the chest (for structural reasons, presumably), Long Haul's size, and Mixmaster's vehicle mode. Though the new paint apps Takara put on can help you pretend Mix is right-way forward if you like. This version also includes a retractable visor which you can use to emulate the cartoon's failure to keep a consistent character model.

- It's HUGE! Seriously can't say that enough. Also almost impossibly poseable, including the much-lauded ankle tilts on the combined mode, which are also present on the separate bots. The Takara version has also added decent elbows to the bots that lacked them, and slightly improved knees to the other two bots so they wouldn't feel left out.


Final assessment? 9.5/10. This is the masterpiece Devastator that we never believed could be made. The fixes Takara made bring the individual bot modes from seeming unfinished to being complete bots, and the improvements to the appearance of the combined mode similarly result in a more finished-feeling toy. Tall and imposing combined, appropriately not-imposing separated, and fun to transform and pose in all forms, there will likely never be a better Devastator than this.