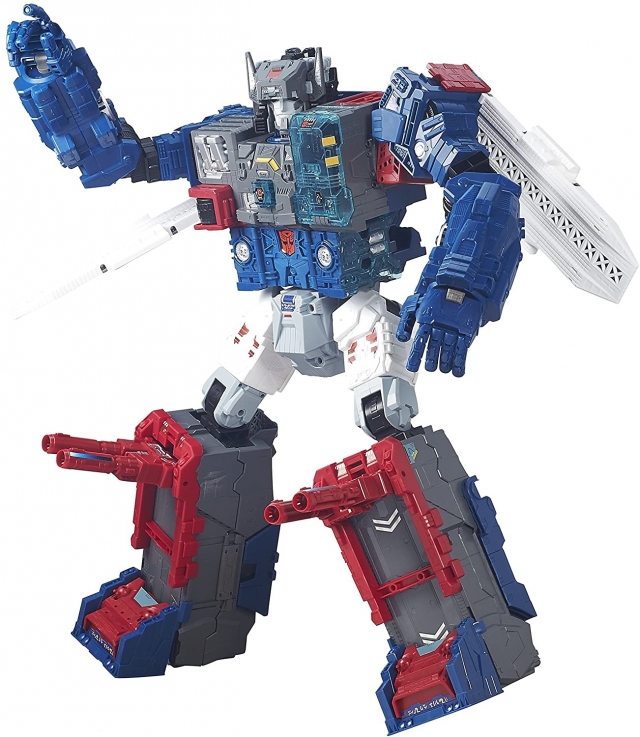 The Transformers battle explodes into uncharted territory when the Titans Return!

To control an ancient race of giant city-sized warriors called Titans, the Autobots and Decepticons must power up with Titan Masters, smaller bots that give bigger bots increased abilities. Unite and power up for battle with one of the last remaining Titans in the universe, Fortress Maximus!

When they're all connected, the Fortress Maximus Hasbro figure stands nearly 2 feet tall! It features lights and battle sounds, a character card with tech specs, a Cerebros figure, and a Titan Master Emissary figure. Cerebros converts from robot to the head of Fortress Maximus in 5 steps, while Titan Master Emissary converts from robot to head for any Deluxe, Voyager, or Leader Class Titans Return figures in 1 step.

Ever since I was a kid I wanted a Fortress Maximus! Originally this would of been to expensive for me, but I ended up getting a discount due to the holidays. I really wanted the Cerebros head because that was the one I liked the most, but I wanted the master sword too.. So I just got the third party accessory.

This figure does have some problems, weak ratches are a problem for this guy. Especially in the thighs and the knees. The guns do have a problem staying up but if you use their handle for a gun, then it holds them up just fine. The titan master is a little difficult to get in the body of Cerebros. I do wish they kept more with the original design but..with the legs being posable no matter what mode you have them in, you can make due with some interesting base modes.

It's huge! I had to fit it under a table. One of my nephews came over and played with it. He had it sprawled out all over the place. It's a great toy for what it is! I find myself enjoying its presence every day.

Just like Metroplex, this guy comes shipped with one arm detached so it can fit in the box. Love it!!! Yeah some things could be a little better but that's what the upgrade kits are for. If you like to add lights or customize your Bots, get this guy! Tons of places to put stuff like that. Definitely getting another one so I can dry brush it. Like Metroplex, this guy will skyrocket in value on eBay as time goes by. Totally worth the money!!!

You would not believe that a two foot tall transformer could weigh 12 pounds and transform three times and have a double headmaster mode, but this thing does and is well worth the money!

This is a very good figure and update to Fort Max. This figure looks good and is huge. Yes, I wish he comes with a gun, sword, and his G1 bot friends, but overall I like this update. Some flaws are he needs to stand on a flat surface because he tends to lean back. So standing him up on a carpet floor is very difficult but he stands fine on a flat table top, etc. His city mode is not as good looking as his G1 version. It'll take some time to put all the stickers on him. But these flaws shouldn't deter you from getting him. For the price, you get a good bot huge in size and looks fantastic.