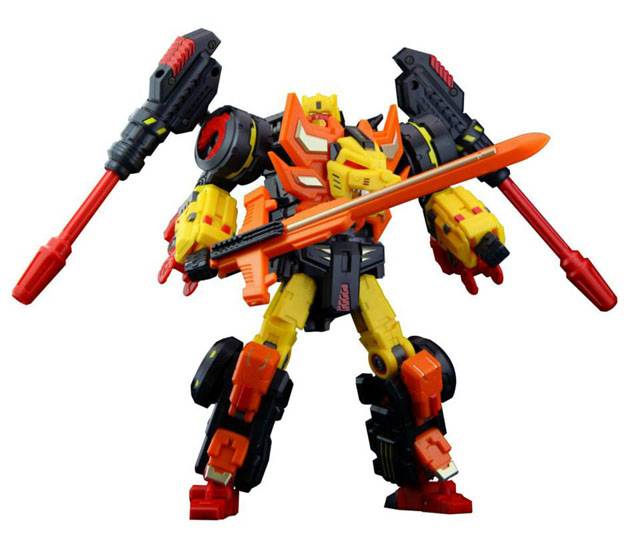 Nemean is one of 5 figures by TFC toys, that combine together to form the mighty Project Ares! When all combined, these figures will present one of the most impressive combiners to date: Ares!

I have Perseus and Uranos, and I actually like both of those, but for some reason, the more I play around with Nemean, the more I find faults with him. I'm not sure how I would feel about him if there were not two other "Not" Predakings out there (I actually REALLY like War Lord's combined look, that fits in perfectly with a Classics/Generations collection, and even given its minor faults, Feral Rex looks like it will fit in pretty well in a Masterpiece collection). When I first got Nemean, I thought he would fit in really well against Masterpiece Grimlock, but the more I look at them together, the more Nemean looks out of place. His design is a little too cartoonish (mostly due to the colors), and he's missing a certain realism TFC's prior releases had. I think I could probably overlook some of his faults, but it gets annoying with how his torso keeps on sliding loose, and even though his legs actually do snap in place, it is really hard to get them to unsnap. I really wanted to like him, but there are just so many things that I just hate. The only mode I like so far is his combined torso mode. The robot mode looks OK, the lion mode was fine at first, but the more I look at it, the more it just leaves me wanting, and I absolutely hate the orange sword and large red shoulder cannon designs that just look really cartoonish (even War Lord, which is meant to be cartoonish/toylike has shoulder cannons that look more realistic). I really regret purchasing him now, and will have to wait till the other figures come out to determine if I will go all in with a full set, or if I will end up selling him (again, which is a shame, because when Uranos was up for sale, I actually pre-ordered all 5 at the same time). Really disappointing, and unfortunately, it will prevent me from going all in on future TFC projects till I see the final combined mode.
Two and a half stars, rounded up to 3.

I just received this today and I have to let everyone know that it is probably the best adaptation of G1 Razorclaw that I have seen so far. absolutely fantastic figure. Even if you go with one of the other combiners pick this guy up just to have a Razorclaw on your shelf. Stunning!