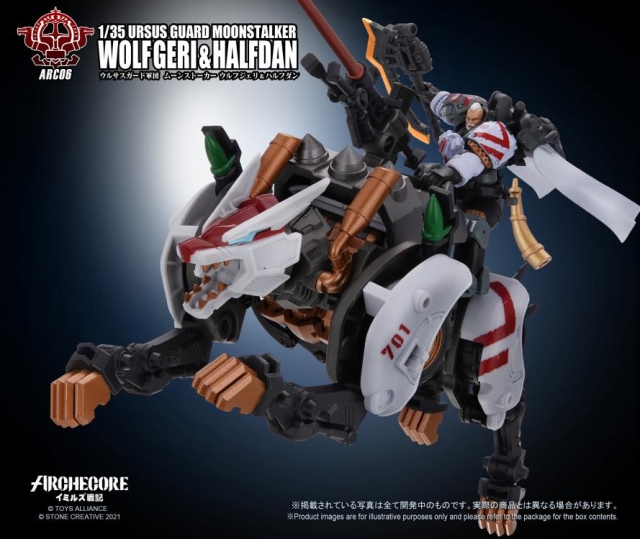 quot;Wolf Geri" is one of the relic weapons excavated from the underground ruins of ARCHECORE. It possesses two known modes, including transport mode, the extremely mobile energy vehicle and wolf mode, the exclusive mount of Halfdan the Hunter. Its white exterior gives it an advantage when performing missions such as reconnaissance, ambush, or sniping in terrain such as snowy ridges.

Halfdan's hunting skills compliment wolf mode's battle prowess, forming the unique battle style known by the guard as "MOONSTALKER". Halfdan's uncanny senses and wild instinct have allowed him to become the first hunter to successfully capture Xenobeats since "Divine Reckoning of the 12", spreading his name as the top hunter at the northern borders in the Kingdom of Veck.

Since joining the Ursus Guard, Halfdan has earned the reliance and trust of young Commander Orn due to his rich experience in hunting Xenobeats and understanding of northern terrain. Since achieving victory in the "Battle of Desolate Plains", Orn has been active with ARRIVAL while simultaneously commanding Helfdan to lead a team of MOONSTALKERS to penetrate an abandoned town in Elmo Polis to gather intel...