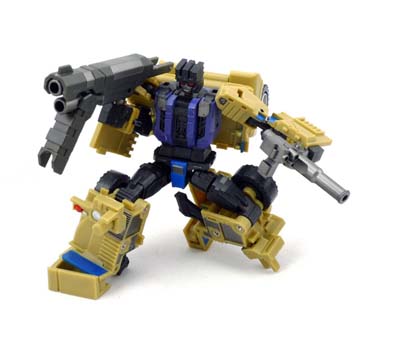 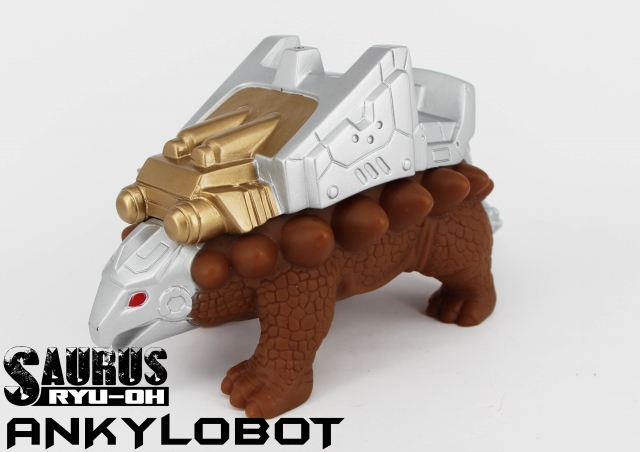 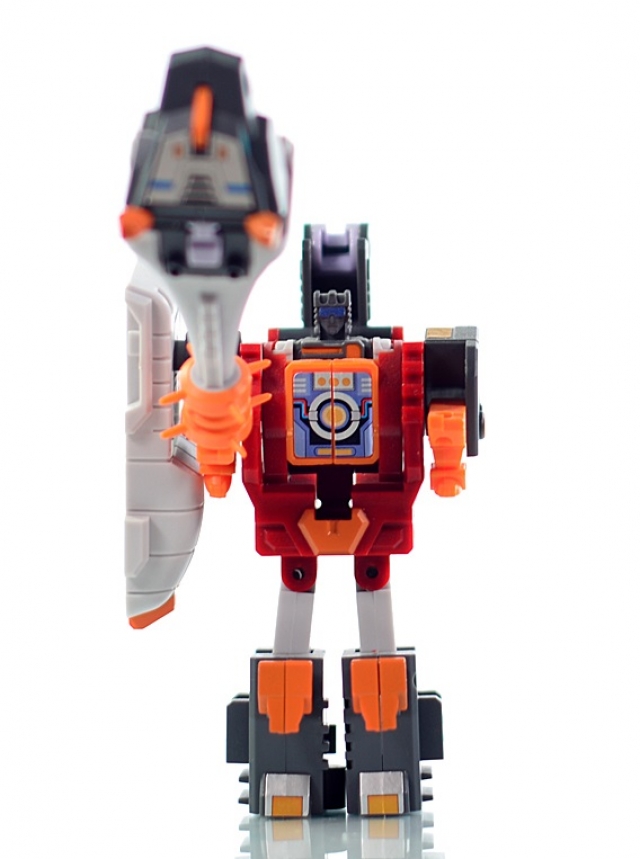 The next great custom figure set from Fansproject - the Crossfire 02 Set , featuring a Munitioner and Explorer, a combat support vehicle and space shuttle set respectively! Includes 16 points of movable joints, high quality with attention to detail,and arms with dual joints for a wide range of motion.

Note: Munitioner (Combat Support Vehicle) and Explorer (Space Shuttle) are each sold separately, and both must be purchased in order to combine with Bruticus as shown.

Note: Bruticus pieces need to be purchased separately, and pictures are of an unpainted prototype, final product will be colored.

Along with Explorer, Munitioner is my first purchase of a third-party Transformer, and I have to say, it's worth every penny spent on it. The engineering and design that went into the creation of this toy cemented FansProject's spot as one of the best, if not the best, third party Transformers company.

Munitioner is a spot-on representation of his Combaticon representation. The toy's colors as well as the facial expression perfectly captures the personality of Swindle's character. His compact transformation results to one of the sturdier and more durable designs, a must have for any Transformer.

I would give this product 6 stars, but the drop down only lets me give this up to 5.

Wow.... My bruticus is armed to the teeth and looking good.Swindle and Blast Off were done up right by the fine creative team of fansproject. I have no complaints at all about these add on kits.I hope they do the Stunticons or dare i say it the Predacons next.First was the Aerialbots,which blew me away, now these works of art blew my frickin mind even further.I just love the way all the pieces ineract with the small robots leaving no leftovers.The way the feet of bruticus attaches to Onslaught to extend his truck mode was a nice G1 nod as well. I highly recommend these two add-on kits to any fan of G1 or Bruticus fans.

Crossfire 02a+b are little bundles of Awesome! Iâ€™m glad I splurged on them. I'm going to focus a bit on the parts most of the reviews I've seen so far skip over: namely how the vehicles are upgraded, especially Onslaught.

But first, the new figures: XF-02b Munitioner, aka Swindle, & XF-02a Explorer, aka Blast Off (I'll be randomly switching back & forth on the names).

I'm starting w/ Swindle, cause I always liked the greedy little weapons specialist, who it's said can sell oil to an Arab Sheik. FP's Swindle's so slick, he could probably sell health insurance to someone on their death bed w/ his affairs in order! lol Seriously, the guys at FansProject didn't do what Hasbro so often does & cut corners on paint apps, no. They gave Munitioner no less than 7 different colors. Every head/ taillight is painted: silver or red! These little guys are nearly as possible as we humans are (about all thatâ€™s missing is wrist articulation)! Some people complain about Swindle's backpack kibble, but they fail to realize that's exactly how his original toy did it... That's an homage folks. Munitioner's robot mode is almost identical to his original toyâ€™s, give or take more detail, possibility & coloring. A nice touch many seem to miss is that Munitioner has little, almost unneeded heels. They provide that extra bit of stability so you don't accidently knock him over, but I've seen him stand w/o them. & everything lines up & the transformation joints are tight (a bit too tight for comfort in some spots, but workable). Munitioner feels the more solid of the 2.

& they didn't stop w/ Swindle when they were passing out massive numbers of coloring. Explorer got at least 6. FansProject did a bit of reimagining of Blast Off: They found a way to make him in scale w/ his fellow Combaticons: he's now an Experimental NASA Unmanned Shuttle Drone, an X-34 (check Wiki if you don't believe me). Also of note, Explorer's length in X-34 mode is just a tad longer than Classics Astrotrain (a Deluxe), but his robot mode is in scale w/ the other Combaticons. Explorer's plastic seems a bit thin, but I've had no issues transforming him back & forth. The plasic used feels different than Hasbro's; it feels like the plastic used on my Toynami Masterpiece Robotech Beta Fighter. Explorer is a really nice, detailed copy (again, w/ a few updates) of Blast Off. His tailfin becomes an ax & can unfold into a long sword, which appropriately looks like a combat knife when held by Bruticus. On my Explorer, his head is a tad loose (but still holds in place... & is tighter than Vortex's head). The peg for Bruticus' fist is also a bit loose, which seems to be an issue on EVERYONEâ€™s from what I've read online.

Now for the accessories:
I've counted 4 colors on most of the accessories, w/ plenty of detail. Everything has a place in all mode (guns & missile pods in Robot mode) except the fist-guns in Onslaught's new Launch Pad Mode (another G1 homage), which I found a place for them (tucked into the holes in Bruticusâ€™ the feet) anyway. Onslaught & Vortex feel, at least to me, to double in weight w/ all the parts they get. Vortex gets missile pods & landing struts in vehicle form, & Onslaught goes from Missile truck to his G1 Anti-aircraft flat bed, which can haul Blast Off. In Launch Mode, though it doesn't attach to Onslaught, Bruticus' groin plate attaches to Blast Off's feet to hold him stable/ vertical on Onslaught's launch platform. At times, I've been able to lift Onslaught w/ Blast Off in launch position w/o Blast Off tipping over! Many people don't care about the vehicle forms, but I love the improvements to these 2 (Brawl just get's the 2 remaining guns, but it's still a G1 homage). Ironically, FansProject left Swindle, the Combaticon weapons specialist, w/ a single gun in vehicle mode & Blast Off completely unarmed as a shuttle drone. But that's ALSO a G1 homage.

In fact, the entire set appears to pull G1 homages out of thin air! Which brings me to the combined mode: Colossus/ C3, aka Bruticus! This is the main reason these figures are so popular, a G1 accurate Bruticus. Even in the Energon colors (which I have), the only color match issue (FP matched these to RotF) isn't w/ Bruticus, but w/ Onslaught's vehicle mode (& even that is a minor issue, & a nonissue once you realize the color issue is on a trailer, not the truck pulling it). Energon Onslaught's blue & grey look WONDERFUL on Bruticus. Before I started this review, I went over Bruticus' articulation: the original Hasbro configuration had 13 points of articulation, at best; FansProject TRIPLED it to at least 40 (15 & 44 if you count Brawl's cannons & the groin armor)! 10 of those new articulation points are in EACH (21 if you count both) of Bruticus' new, fully articulated hands! As Bruticus, every piece has a place. Even Blast Off's ax gets stored on Bruticus' left forearm. Though the Anti-material Riffle doesn't have a specialized place for storage if Bruticus' shotguns are both on his backpack, it can be tucked into the connection point for Onslaught's vehicle mode (the handle for robot mode) which holds in place well enough. Another unnecessary detail FP added were that the cannons on the backpack can fold down on either side of Bruticus' head! The backpack does have a minor issue: Thereâ€™s a dual peg/ hole system that only partly works: the peg on the pack doesnâ€™t always hold, but the hole next to it is quite enough to hold the backpack on anyway; pressure solves this.

I recommend FansProject's Xfire 02 set to any TF fan, & it's a must have for any Bruticus fans! This set takes a mess & recreates it as perfection.

Reading the instructions is a must!