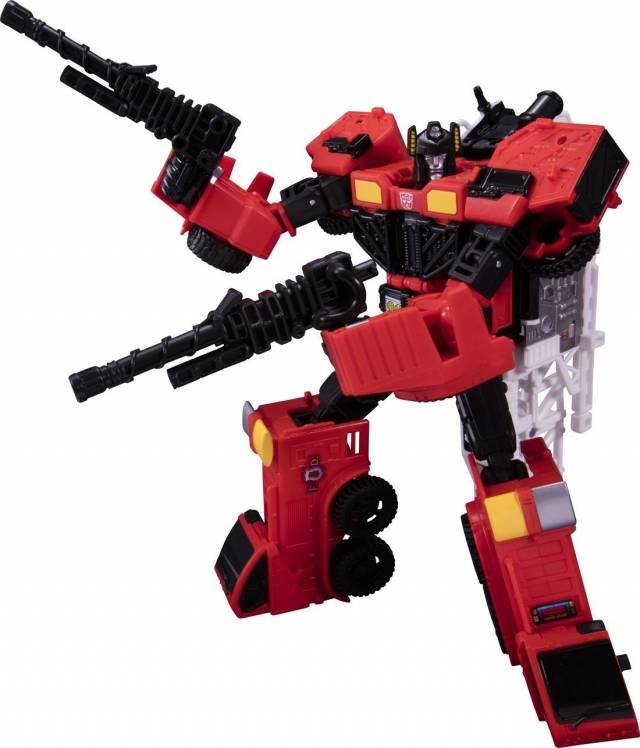 Transformers Power of Prime PP-36 Voyager Inferno is the Japanese Voyager Class version of the US Power of the Primes release of Inferno.

Transformers Generations Power of the Primes Voyager Class figures are 7-inch-scale figures that come with 2 Prime Armor accessories. Insert a Prime Master figure (not included; each sold separately) into 1 of the accessories, attach it to the figure, and imagine Inferno wielding the power of a Prime. The robot action figure also comes with an Autobot Enigma accessory. The Voyager Class Inferno figure converts between robot and fire truck mode in 22 steps. Combine it with 4 other Power of the Primes Deluxe Class figures (each sold separately) to form a Combiner super robot!

Inferno is a fearless bot who races in to fight the fiercest flames or battle the nastiest Decepticons. Whether he's combating fires with his water-blasting weaponry and firefighting equipment or taking on Decepticons with his fists and colossal strength, Inferno will do anything to rescue his fellow bots. The 12 Prime Masters carry the god-like abilities of the Primes: powers including time travel, infinite knowledge, and the ability to seed new life forms. How will Inferno wield their incredible power?

The Autobots and Decepticons use Prime Masters to wield the incredible powers of the legendary bots who shaped the universe: the Primes. Prime Masters carry the spark of a Prime, allowing them to share a Prime's godlike ability with other bots. How will the firefighter Inferno wield this epic power? Anything is possible and everything is at stake when the Power of the Primes is unleashed! Seven inch scale Transformers Generations Power of the Primes Voyager Class figures work with Prime Master figures (not included, each sold separately). Use the included Prime Armor accessories to attach a Prime Master figure and imagine Inferno wields the power of a Prime.