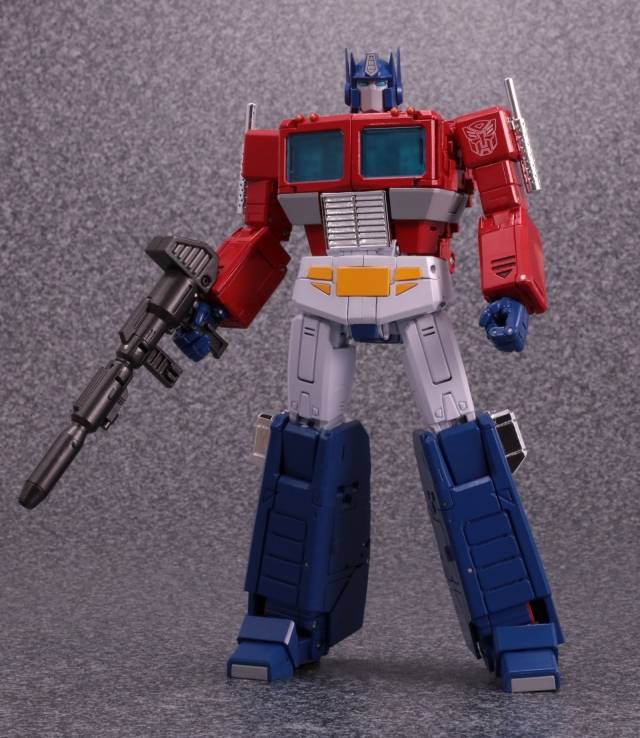 It’s time to become a true leader of the Autobots with the Transformers Masterpiece MP-44 Convoy 3.0 Optimus Prime figure from Takara Tomy! The selfless and courageous leader of the Autobots is back with a new and improved version of his amazing masterpiece figure. The MP-44 Convoy 3.0 Optimus Prime figure features the iconic, beloved Autobot leader in all his regal glory—and much, much more! In this remastered version of the masterpiece figure, Takara Tomy pulls out all the stops to create one of the best Optimus Prime figures around. This is one collector’s item you won’t want to miss.

The quality and durability aptly maintain the high standards of Takara Tomy’s masterpiece Transformers, while the engineering and manufacturing utilize modern techniques to create some of the most awesome articulation, ease of transformation, and posable action you could ever desire in a collectible Transformers figure. Both the truck cab and trailer are engineered this way and the coloring of the figure remains faithful to Prime’s G1 appearance with an updated sculpt to reflect more modern cartoon/anime sensibilities.

This masterpiece Optimus Prime stands at a significant 9.2” tall. Not only is this beautiful figure incredibly detailed, but it comes packed with more accessories than just about any other masterpiece figure. This is where the figure truly shines. The MP-44 Convoy 3.0 comes with three different heads: the standard Optimus Prime head, a battle-damaged Prime head, and a Starscream head with accompanying shoulder pieces—just in case you want to replay the episode where Starscream imitated our fearless leader.

Optimus Prime is heavily armed with his signature energy axe and rifle, including two blast effects. Along with the tractor trailer—which itself can be opened in order to store other vehicles—you get a gas pump and hose along with Roller, a detachable repair bay robot that can attach to the trailer while in alt mode. Rounding out the arsenal are Optimus Prime’s jetpack and a Matrix of Leadership. Prime’s trailer can hold Masterpiece scale cars as shown, but keep in mind that the cars/figures are sold separately and not included with this figure.

This figure will likely go down in history as the greatest masterpiece version of Optimus Prime and it’s worth it for the glory of having the greatest leader in Autobot history as the centerpiece of your collection. Get yours today at Toygeek.com, your source for everything Transformers! 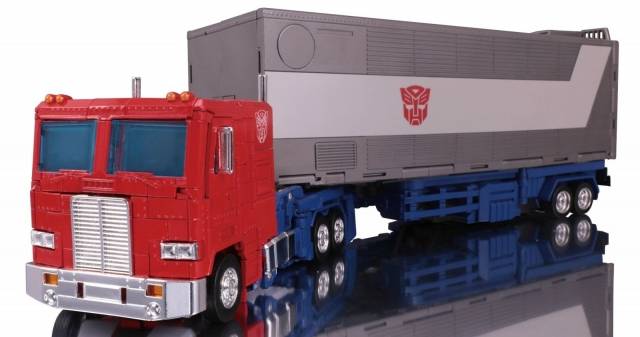 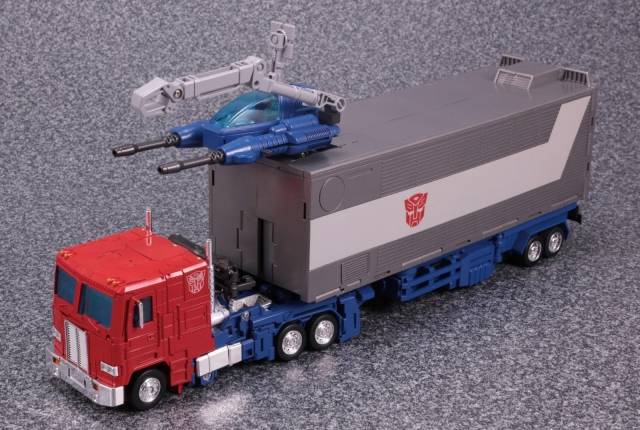 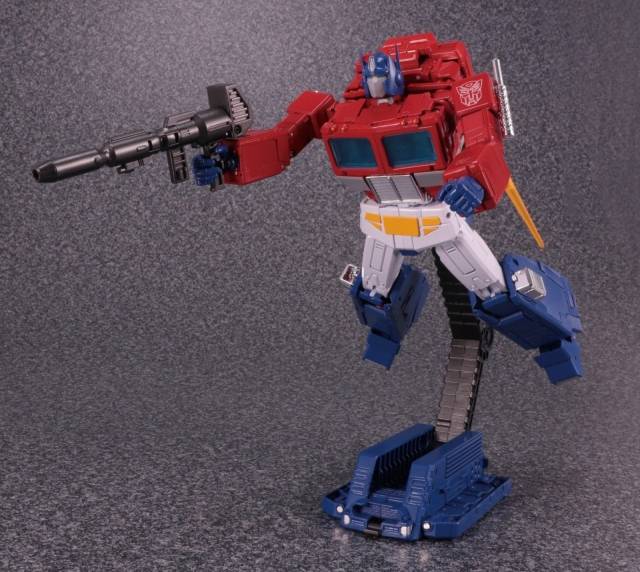 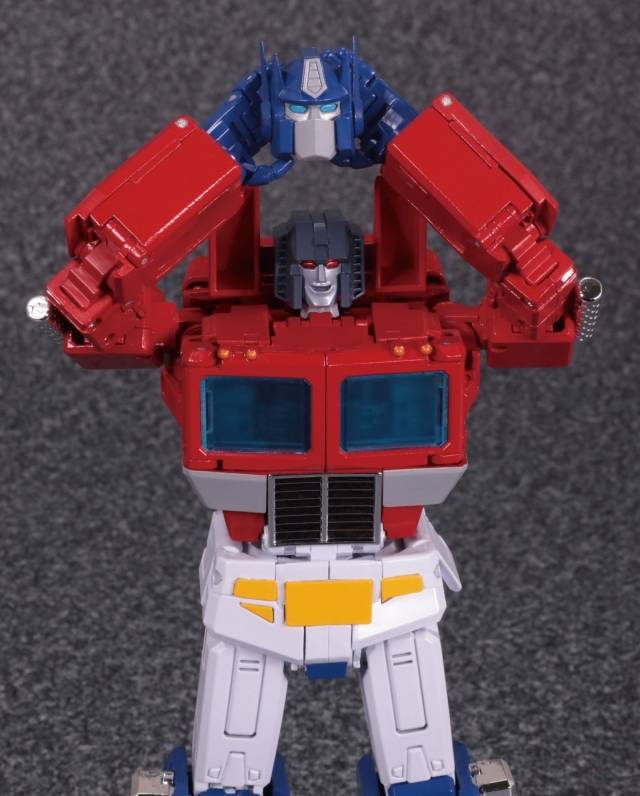 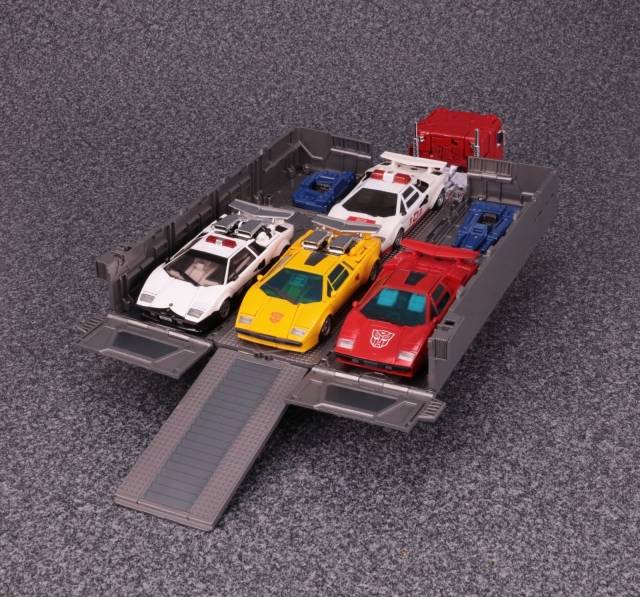 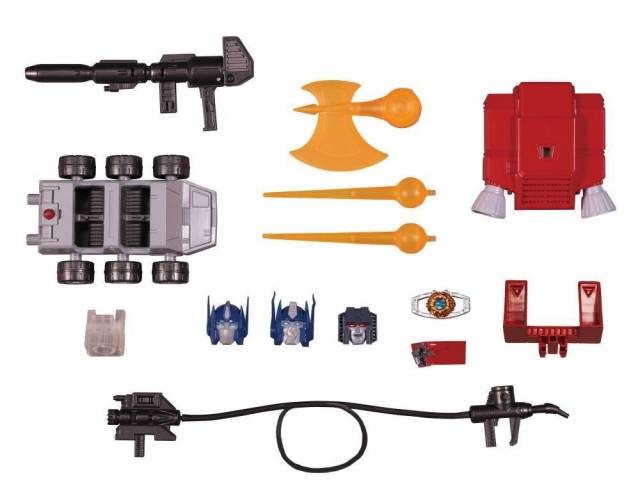 Excellent figure, looks exactly like Optimus from the G1 cartoon. A bit on the pricy side, but all worth it.

THIS MASTERPIECE PRIME IS BEAUTIFUL AND SPOT ON WITH THE G1 CARTOON PRIME. ITS EXTREMELY ACCURATE AND DETAILED. THE JOINTS ARE SUPER TIGHT AND MADE WELL. THE TRANSFORMATION TO PRIME AND BACK TO TRUCK MODE CAN BE INTIMIDATING AT FIRST BUT PRACTICE MAKES PERFECT. DEFINITELY A MUST HAVE ITEM FOR A TRANSFORMER COLLECTOR.

really great attempt at making a G1 Cartoon figure..
however, it's insanely overpriced.

The MP44 Convoy is a gorgeous rendition of our favorite leader.
The figure as excellent action articulation, rivaling articulation found in non transforming figures such as the offerings from bandais figuarts line.
The figure comes with many accessories to fit any collectors view of Prime.
The flaws i found was the abundance of paint chipping on my copy out of the box (post transformation) and the waist and legs can become wobbly due to a somewhat poor build.
unfortunately the figure comes in its alt mode so initial transformation might cause minor chipping such as on my copy.
My copy does not have any problems with the knees at all after copious amounts of posing.

Omg this thing is incredible, I love him so much. Thank you

I gave it 1 star because the packaging I received it was damaged. The box seal was open. The plastics inside were resealed with tape over the old. This was suppose to be a mint in a box. Customs declaration states they did not open the box. I got a returned item.

Considering the price was not the best thing, I was definitely one of the lucky ones. I don't have any issues with my copy and this review was way overdue. He's everything I remembered from the cartoon and I'm happy that he's still holding up. Next to Megatron, the memories keep on going. Please watch reviewers to keep from breaking and you too can enjoy him too. If you're able to get him, do so. The voicebox feature is awesome, especially the Peter Cullen clips.

I have to say this from the outset that MP-44 is a costly piece, but when you have it in your possession the nostalgia melts away all the anxiety to get from making such a large purchase. There is no comparison from the previous iterations of Optimus Prime to MP 44 and it is my belief that MP-44 will stand the test of time as the definitive Masterpiece Optimus Prime.The interchangeable heads and accessories , the trailer, paint and and the attention to detail will have you posing and taking pictures for weeks. When placing MP-44 next to MP-10, I realized how dead and cold MP-10 looks and feels. I personally am very pleased with my purchase.

Ok, lets get the elephant out of the way, yes its expensive. That aside, this is without a doubt the BEST G1 toon version of Prime you will ever see. Who cares about the backpack, you wont look at it from behind. Peter Cullen's voice just add to the awesome. Get MP-36 Megs to book end this guy! No problems with the knee on mine, just don't try to force it and you'll have no problems! This fig is a beast!

I like the direction TT is taking with the MP line going for toon accuracy, articulation, and less kibble, so this OP blew me away. Not all of the efforts in this vein have been winners (ahem! MP 45), but this one is, in my opinion. Is it perfection? No, but it's hard for me to imagine how they could've done something better short of mass-shifting. Very ambitious. Well done! Pricing is still bit crazy nonetheless, but I don't know how much this costs them to make, but MP 36 was glad the cost, and MP10 has gone up. Not digging that so much

I'm impressed with this beautiful figure. It depicts the original (cartoon accurate) G1 Optimus Prime in the best possible way. The articulation is perfect, the paint is stunning and its overall appearance is mind-boggling.

I have the Magic Square Prime. I liked everything but the hip skirt. I wasn't sure about the price point for the Masterpiece Prime. I thought the backpack looked too big in pictures. It doesn't look too big at all in hand. In hand this figure just blew me away. It's pretty amazing.

A beautiful figure, though the torso is a bit slimmer than I prefer. The accessories are well made and fun. The colors are spot on perfect. The only thing that keeps this from being a 5 star figure is the price, and transformation. I suggest you watch a video as I found the instructions useless. I had no paint problems or knee ratchet issues.