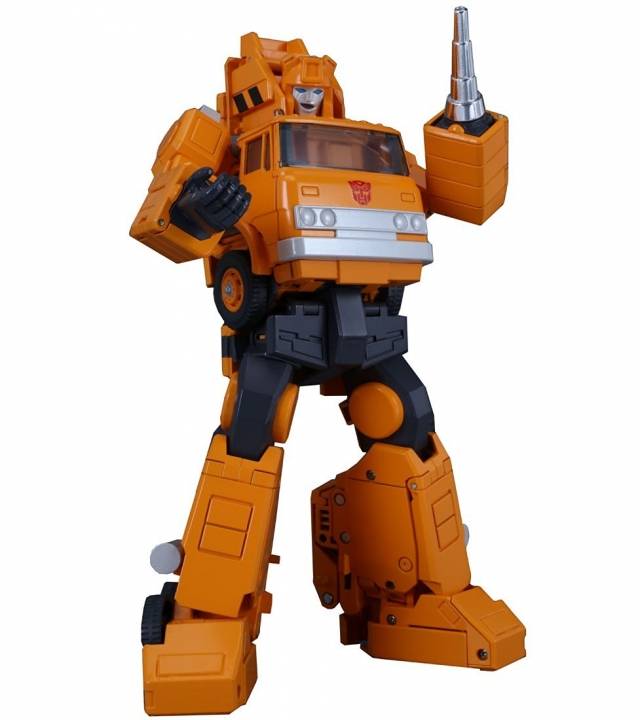 Transformers Masterpiece MP-35 Grapple jumps straight out of the 80's Transformers G1 tv series and into your collection with this amazing recreation of his G1 likeness.  A recolor and remold of MP-35 Inferno, he also includes the model and the blueprint for the Solar Power Tower, a new handgun, and the screwdriver to build it, all from "The Master Builders," and two extra crane arm attachments seen in "Auto Berserk". He also comes with an alternate helmet based on his more toy-accurate early head design, seen in both "Auto Berserk" and the original 1985 Autobot Cars commercial.  All of his amazing accessories allow you to recreate famous scense from the 80's Transformers animated tv series.  Accessories included:  Arc-welder rifle, 2 headpieces, 4 faces, 2 wrist barrel attachments, 2 chestplates, Solar Power Tower model, Solar Power Tower blueprint, screwdriver, shovel attachment, and claw attachment.

MP-35 Grapple is likely the greatest version of Grapple and a true masterpiece of a Transformers figure.  A centerpiece of your collection get yours at Toygeek your source for everything Transformers. 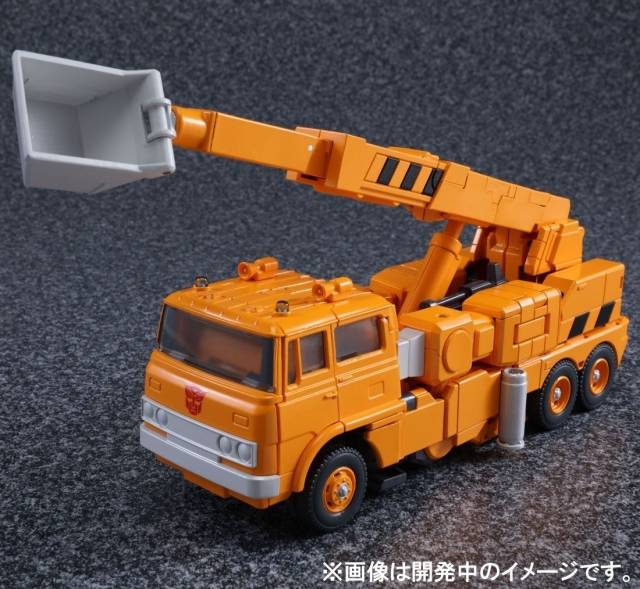 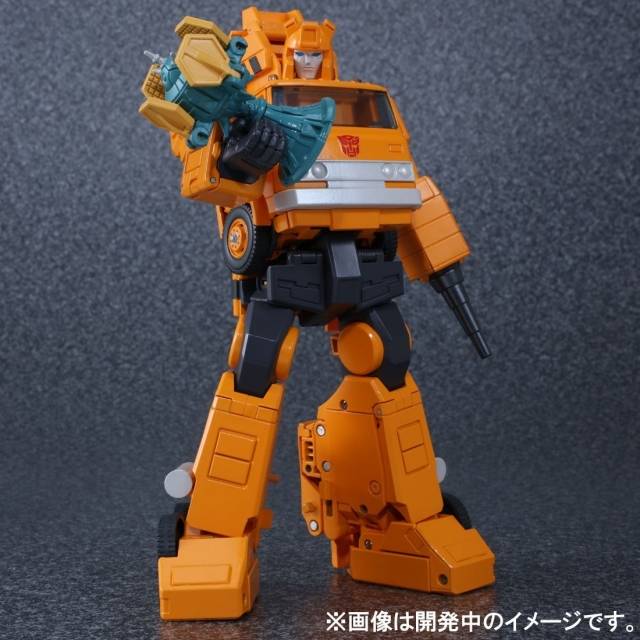 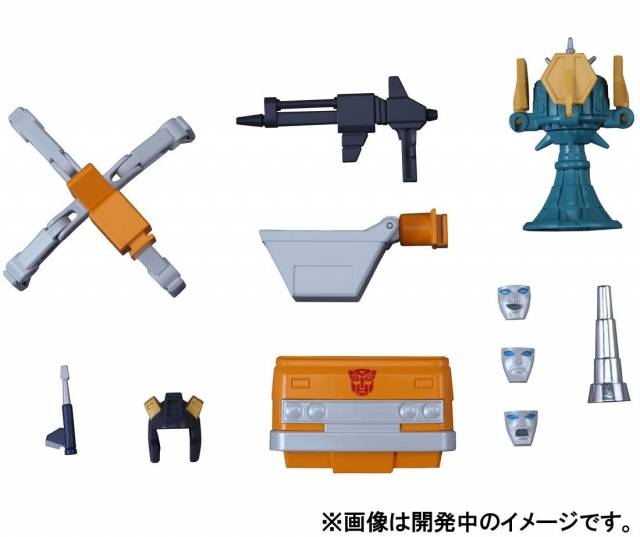 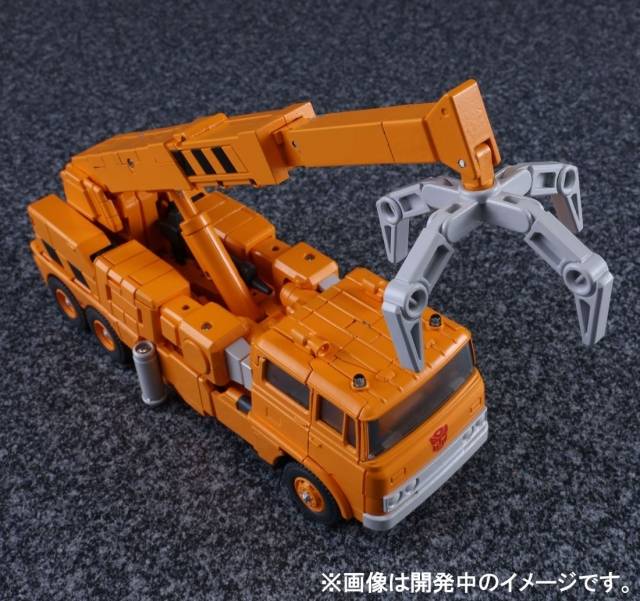 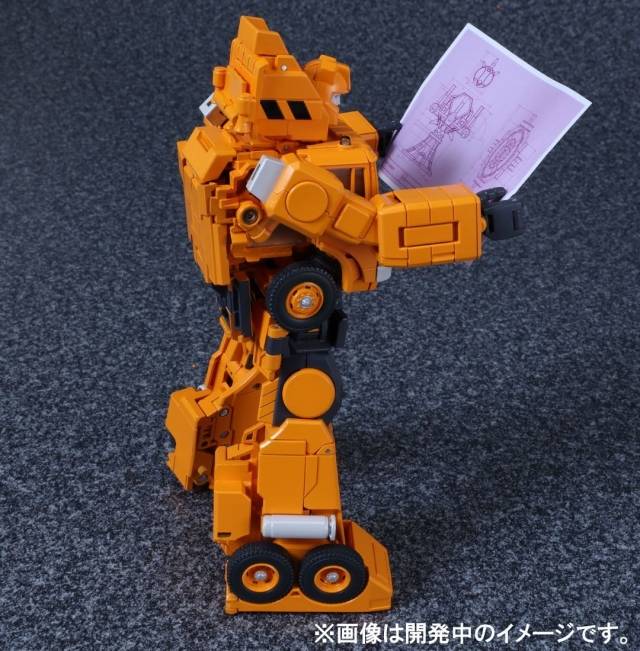 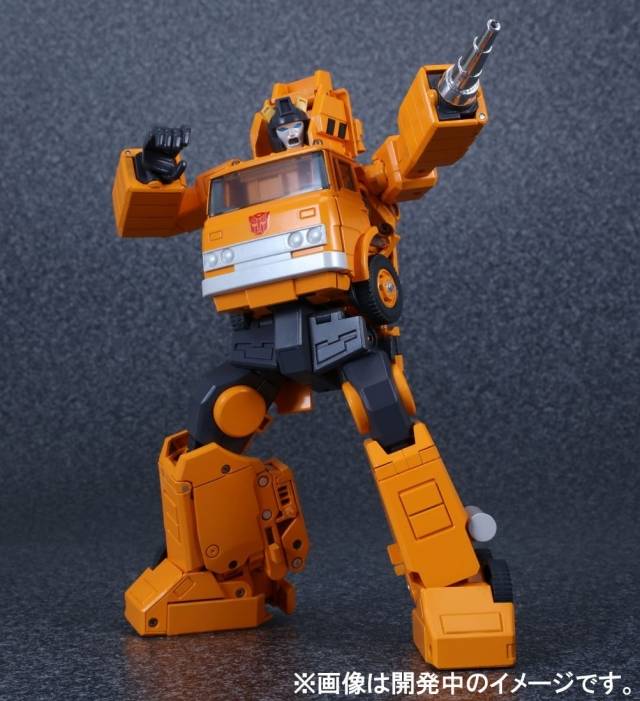 I'm pretty impressed by the figure and all of the options that are included. The cleanup on the back is also extremely impressive. The only problem I had was with the alt mode. It looks good, but it is not as solid as I would like. Moving the crane arm a bit felt like it would make some of the pieces shift a little. I would prefer if things tabbed together a little better. That said, this really only impacts positioning the alt mode, so it wouldn't impact display or anything.

I like this figure a lot. Feels good in hand, pleasant transformation, pretty toon accurate, some fun accessories.

I'm amazed how Takara managed to hide the massive hydraulic arm into his torso. Great weight and balance, very poseable, and an impressive looking figure once you swap out his helmet for the included, optional dark helmet.

The inclusion of lots of ratcheted joints helps Grapple keep his balance, and I appreciate all the visual options that were included with the figure.

He looks great in both hydraulic crane and robot mode, and so far is one of my favorites!

So i got grapple in the mail today and took him out of the box to try to transform him I couldn't get anything to move because everthing is so tight I felt like something was going to break. I don't understand how this figure is designed the same way as Inferno which I had absolutely no problem transforming right out of the box yet I literally can't get this MP figure to transform it into it's robot mode. I can't recommend buying this figure.

This is another homerun that we see when coming from an officlal source like Takara.

Now i was not sure if I was going to like him. I figured he would have been loose or just not well engineerred, You know what, I was wrong. This guy is AWESOME.

I fealt this transformation was one of the most smooth and well thought through from Takara that I have had in awhile. He is so clean and cut I was quite shocked.

He will fit nicely on anyones MP shelf. He also looks great next to 3rd party figures.

This is a needed figure for anyones collection.

This is another super solid figure. I like that he isn't quite as simplistic looking as Inferno. It is great we have so many options for our collections. I have the Maketoys Inferno and MP Grapple and it is great seeing the similarities and differences. I certainly think everyone should get either him or Inferno from Tamara to experience the lovely finger candy that they are. I do like the toy looks more than the cartoon looks in general, and it is nice they provide options to suite your taste.