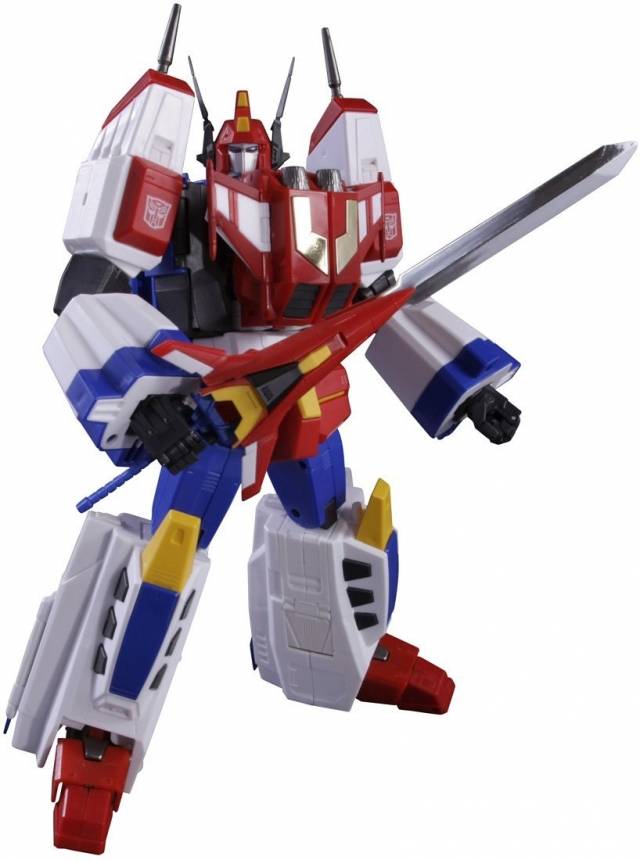 From Takara Tomy Transformers Masterpiece MP-24 Star Saber stands an impressive 14-inches tall in robot mode. Not only is this figure incredibly detailed, but it comes packed with an extinsive array of accessories.  MP-24 Star Saber is highly articulated and transforms from a large cybertronic spaceship to robot and back and as a Masterpiece scaled figure scales with other MP scaled figures in the Transformers Masterpiece toyline. 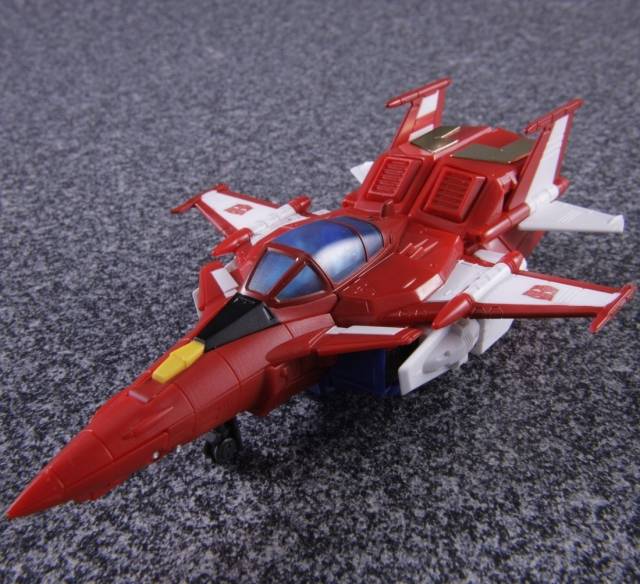 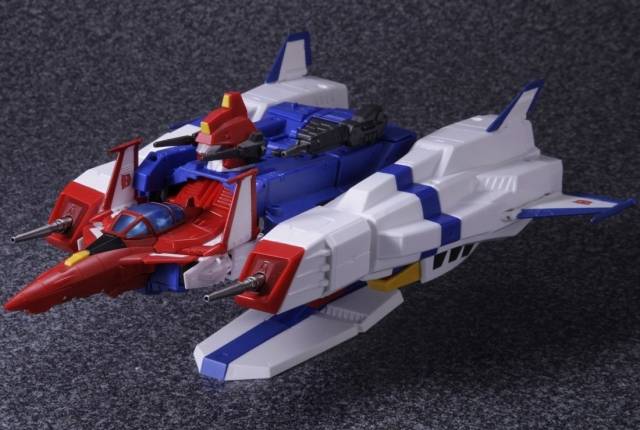 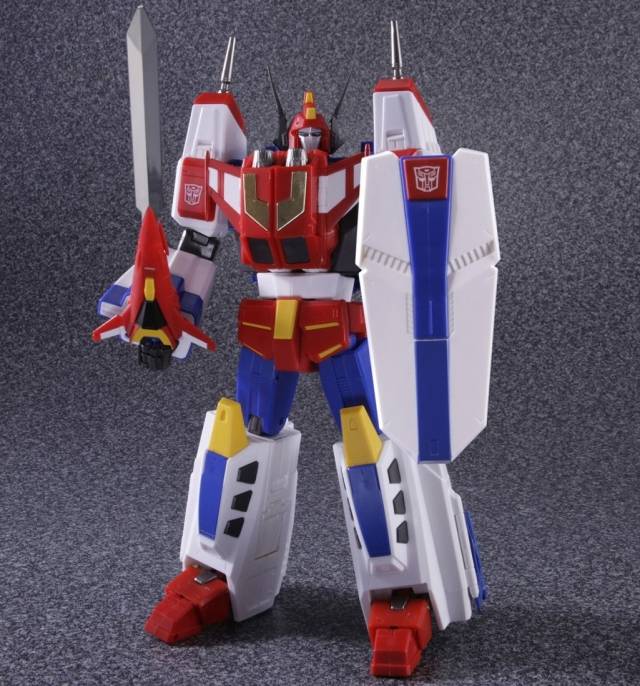 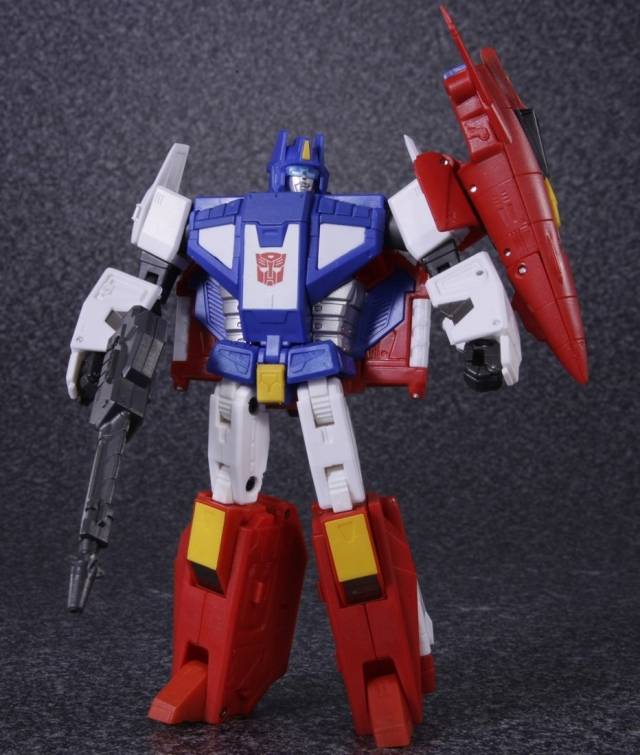 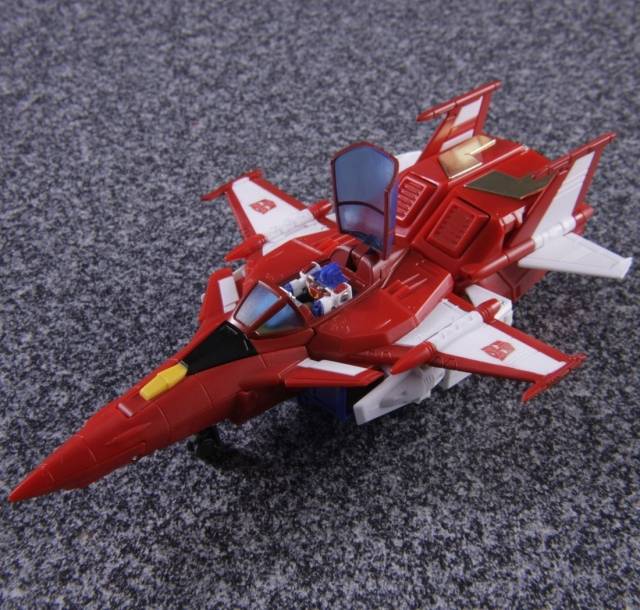 It's a pretty solid figure and I love it but sadly one of the arms on Saber broke with no force at all.

This figure is big and bland. He has near zero paint on him and the plastic used is dull and unremarkable. The joints are loose and the articulation is wanting. The landing gear does not support the weight of the alt mode, as they keep popping back in on their own. I was really expecting more from an MP Takara. The 5 star reviews are misleading, donâ€™t be fooled by the G1 fanboys. Saving grace is that the transformation and combination modes are easy and he is G1 accurate. I got the repro labels set for him because he definitely needs something to break up the vast oceans of plain, uninspiring, dull plastic that make up this figure.

They really paid attention to detail to the show with this character, though there are some flaws. The hands are very weak, they do not hold the sword very well in the combined robot form. It will fall out if it gets bumped to much. The elbows are very weak and they do not hold up very well but you can manage to position them where they are okay. The ankles are limited in their position, but you can altar the stance in order to compensate.

The best thing this figure has going for it is number one, the look. The look of this figure is very stunning and show accurate! It even transforms the same as it does on the show! Really impressive in that regard! The combined jet mode is very much in line with the same way. You have your gimmicks, such as the brainmaster who rides in the cockpit and also goes into the chest of the medium sized robot portion. Overall, this is a great figure, though not without its flaws. It was meant for display-ability rather than play-ability.

Starsaber as I open the box looked just like the tv shows and transformer the same way. both swords the brain set person gun, shield/ stand looked great could not find paint problems on the item

This is a great piece. I love the design and the scale of it. Combined mode is amazing, but like someone else pointed out that there was some plastic stressing on the one I received. After transforming it once I noticed that there was plastic stress in some spots on the back of him. When he is fully transformed into Star Saber you can not see the stress. Nothing too bad, but for the price I expected to be a little better.

Overall great figure. I am very happy with him. I just now need to find a bigger shelf to put him on haha.

Have been following development on this guy ever since he was first announced as MP-24. I finally ordered him about a week-and-a-half ago, and I am not sorry! In short: Victory fans, rejoice! I consider this to be the definitive Star Saber; the blue and red really pop against all the white on this guy, and he's the only MP figure I've seen with a transformation scheme that's almost exactly the same as the original. His main jet body is nicely done, with good chrome work on the legs and a surprisingly satisfying brainmaster gimmick. All the joints on mine are tight, and I have zero problems with plastic quality. The super mode transforms easily, and even though the plastic feels a bit lighter than the other figure, I don't think it detracts from the finished product at all. I have had no problems with broken fingers or plastic stress that other people have talked about. I have been waiting in more anticipation for this MP figure than any other I have ever seen, and I am not disappointed in the least.

He is an awesome figure, but not Masterpiece scale size. Saber himself would need to be about Ten Inches tall and over Twenty Inches tall when transformed into Star Saber. I also hope for Victory Leo to be released, but I also hope Takara releases the six chest force figures in deluxe size to combine to form Leokaiser! Six deluxe figures would stand at 12 inches tall like Star Saber. And having them both on my shelf battling would be cool!!

This figure deserves every ounce of praise I am capable of delivering. Perfectly redesigned , it is a blend of fun and function that has elicited in me a joy unrivaled by a transformer since I was a child. I cannot recommend it strongly enough.

I got my masterpiece star saber recently , and i have to admit no way to hate it plus yeah many poeple complain he isn't part of transformers g1 when he is actually , and i hope that enough of them of are sold that we'll get a masterpiece victory leo

This is probably one of the greatest transformers ever made. The transformation is easy but fun, the individual figures look stunning, and the combined mode is an imposing piece in any collection. This is, in my opinion, a perfect figure, and anyone who can afford this guy should get him for their collection. I would give it ten stars if I could.