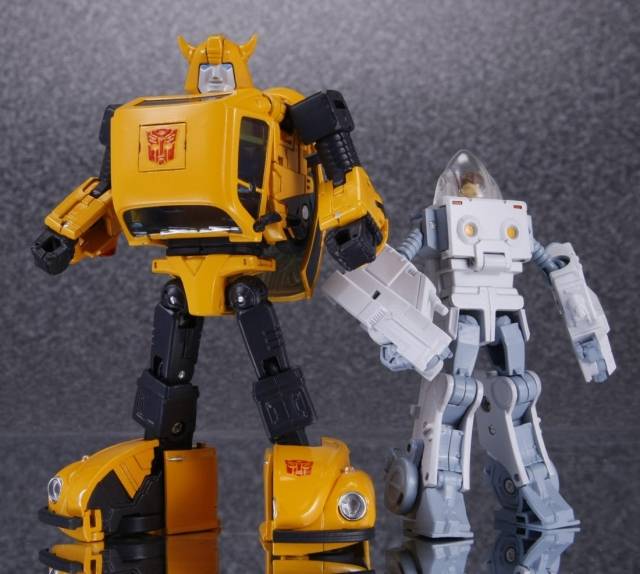 From Takara Tomy Transformers Masterpiece MP-21 Bumblebee and Spike in Exo-Suit stands an impressive 5.5-inches tall in robot mode. Not only is this figure incredibly detailed, but it comes packed with an extinsive array of accessories.  MP-21 Bumblebee and Spike in Exo-Suit is highly articulated and transforms from a Volkswagen Type 1 Beetle to robot and back and as a Masterpiece scaled figure scales with other MP scaled figures in the Transformers Masterpiece toyline.

MP-21 Bumblebee is officially licensed by Volkswagen and he sports his legendary G1 Volkswagen Type 1 Beetle form, jumping straight out of the G1 Transformers TV series and into your collection.  Additonally for the first time Spike in exo-suit is included with Bumblebee and transforms into a mini space rover.   When in vehicle mode MP-21 Bumblebee can fit in the back of MP-10 Optimus Prime's trailer (sold separately).  Bumblebee also includes a Laser Gun pistol, rear-view mirrors, Spike (Daniel) in exosuit, spare tire cover, license plate, and two alternate face plates:  Smiling and neutral.

MP-21 Bumblebee and Spike in Exo-Suit is likely the greatest version of Bumblebee, Spike and a true masterpiece of a Transformers figure.  A centerpiece of your collection get yours at Toygeek your source for everything Transformers. 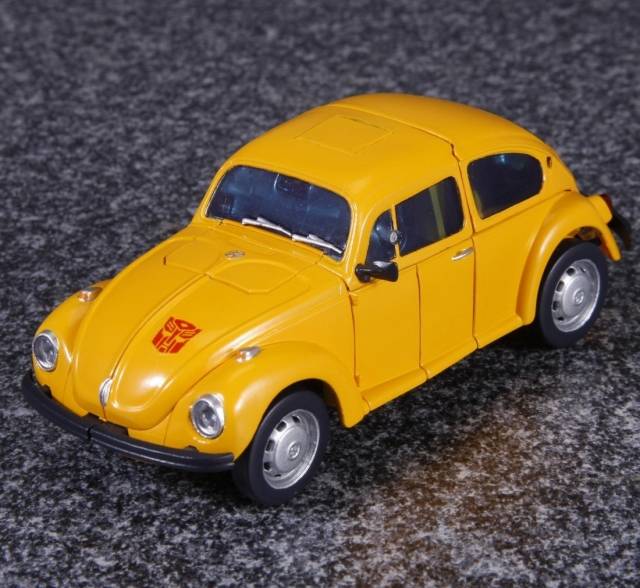 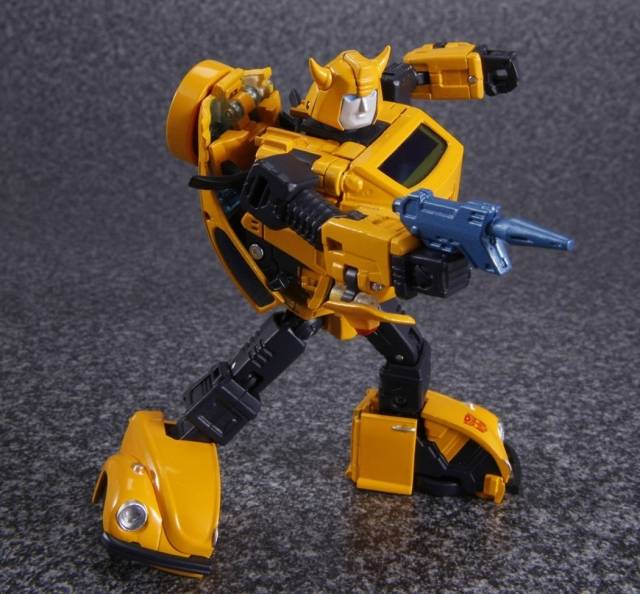 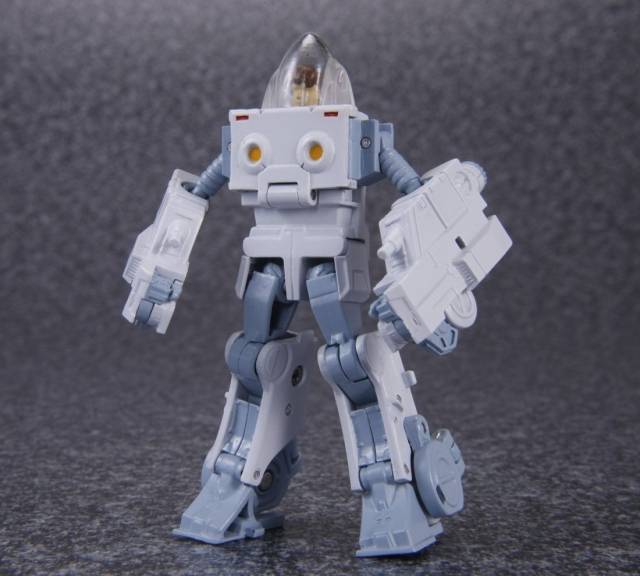 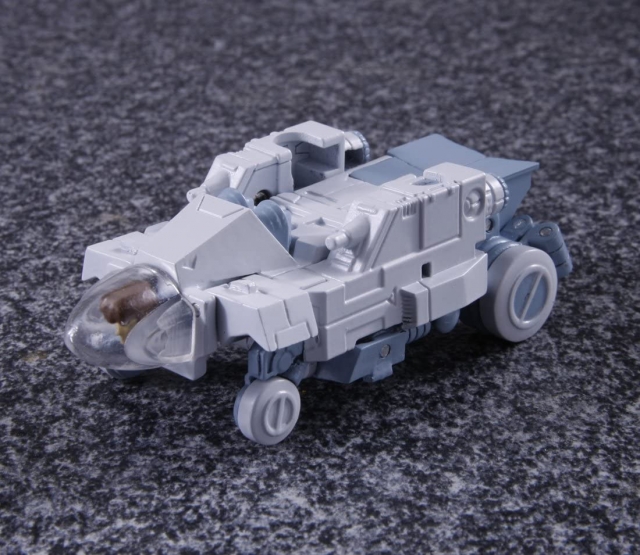 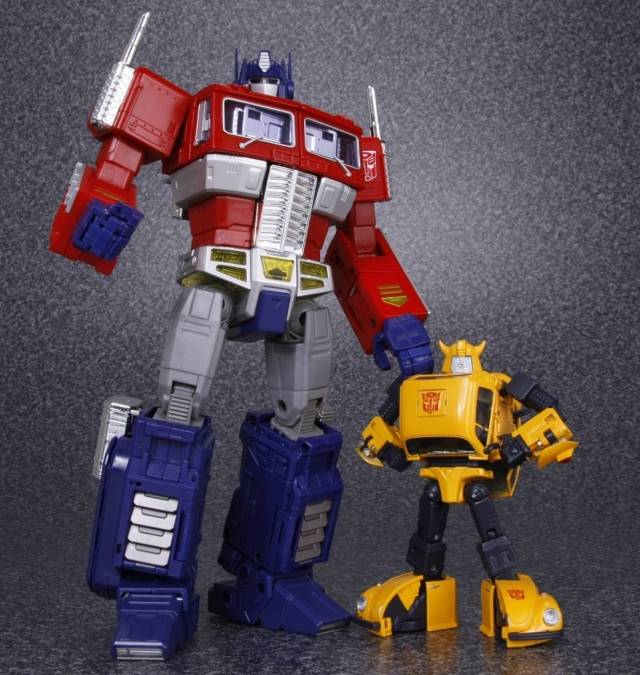 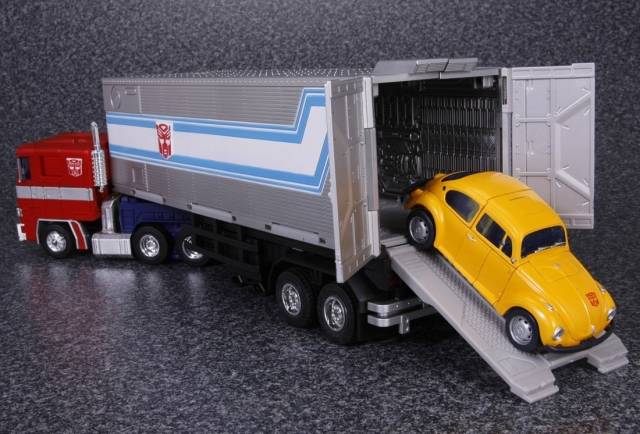 I love this Bumblebee. The transform is simple and great! Everything for the most oart is hidden in root mode/robot mode. The 2.0 version may be more cartoon accurate in vehicular mode than this one , but this one beats it out on everything else. The 2.0 feet on the back isn't that good compared to this one, that's the main reason I got this Bumblebee and I'm sure glad I did. 5 stars!

Paint was scraped off the left side door panel. Unfortunate to receive such a defective product... especially for the price. Very disappointed.

Awesome bot! Spike is pretty cool too, both Vehichle mode and bot mode are spot on and he will look great in any G1 inspired collection. Taktom should pat themselves on the back. Bumbles, is very fun to pose and the transform is the best fun I've had with a bot, I think ever. I can't help but think that there could have been a couple more accessories, but we don't get our bots on the amount of things they come with now do we. Articulation is great, and you can re-create some classicG1 Bumble Bee moments.
I think I have found a gem here, I'm highly impressed with this Mp and would recommend that you pick up one for yourself. 5 stars. Thank you Tfsource.com

Bumble itself is awesome. No complains for that figure. My only complaint that me and my son have is the Spikeâ€™s arms and legs fall off extremely easy. Even if youâ€™re just moving them gently.

Other than that no complaints.

I like the detail of bumblebee. it is easy to transfrm from robot to car.

with all the bumblebees we have received in the past few years, why did it take this long to make a G1 MP bee? but well worth the wait. his transformation is so fun I cant put him down. bug mode looks very realistic, almost looks like a model car sitting on the shelf. robot is beautiful. looks like he stepped right off the screen. I love the smiling face. articulation is awesome for something so small! Daniel is great little figure too. looks just like the 86 movie exo suit in every detail. atrticulation.....sucks lol but its ok hes half the size of bee, what can you expect? but makes me wish I had two. one as spike one as Daniel. over all if you have not bought him or thought of buying,,,go for it. I can not recommend him enough. no MP collection is complete with out bee!

This is my Bumblebee. Michael Bay's Bee isn't half as cool as the original. It's hard to put into words how cool it is to see this one done right.

Totally impressed with this figure. Awesome for a MP Minibot. Highly recommended!!!

Bumble Looks just like the tv show and the Exo-suit of spike transformers. So you get two toys for the price of one. You can have a spare tire on the back or under to front with the gun.