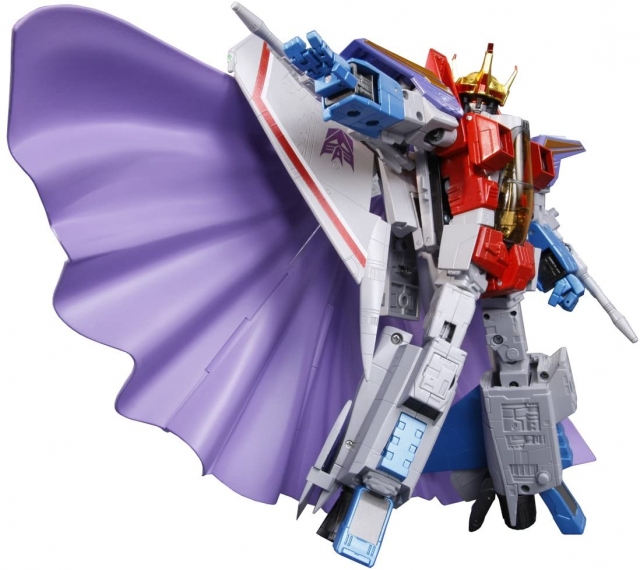 MP-11 Starscream jumps straight out of the G1 Transformers movie and for the first time ever includes his Coronation Crown, pauldrons and Cape.  Included for the first time is a hologram pilot figure in place of Doctor Arkeville, and features heavy retooling and details not present on the MP-3 Starscream figure, bringing him together for the first time in true Masterpiece glory.  You can almost feel him sneering Yes Megatron every time you look at this figure.   Accessories included with this figure are as follows:  Crown, pauldrons (left and right), cape, 2 null-rays, and hologram pilot figurine.

MP-11 Starscream with Coronation Crown and Cape Set is likely the greatest version of Starscream and a true masterpiece of a Transformers figure.  A centerpiece of your collection get yours at Toygeek your source for everything Transformers. 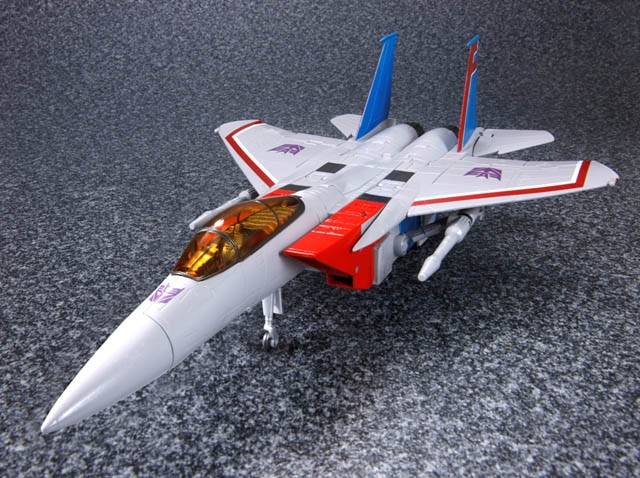 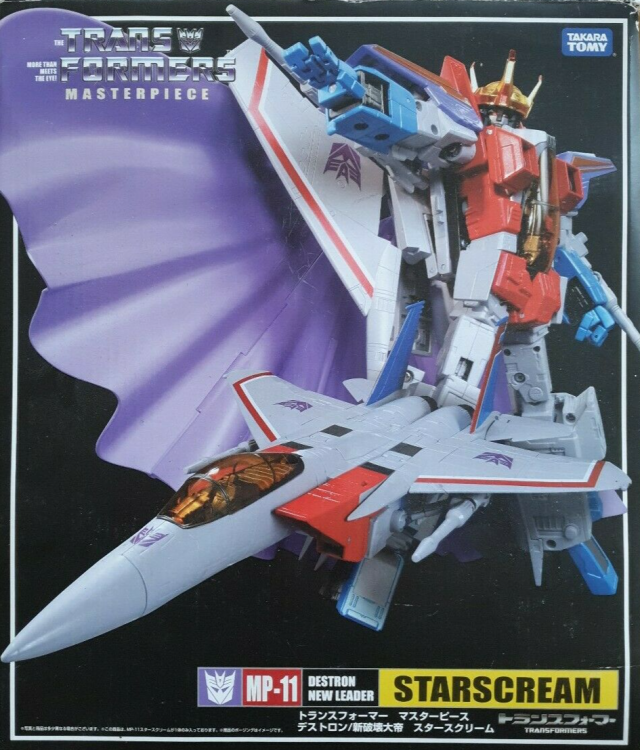 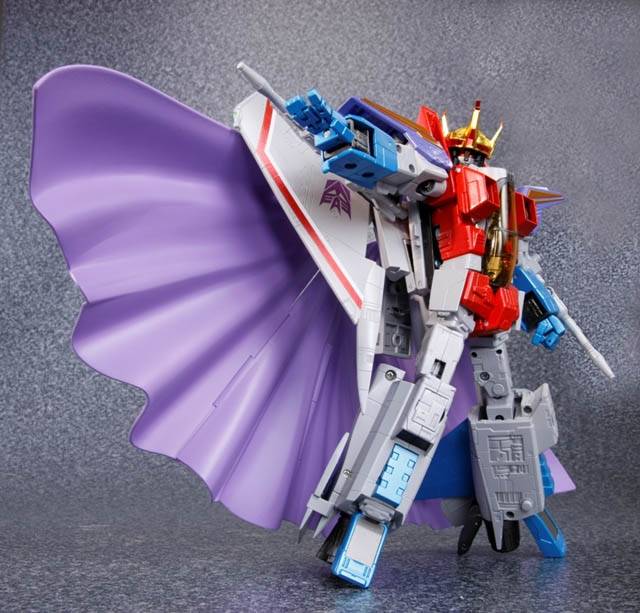 Transformers Masterpiece MP-11 Starscream With His Crown And Cape Accessories! 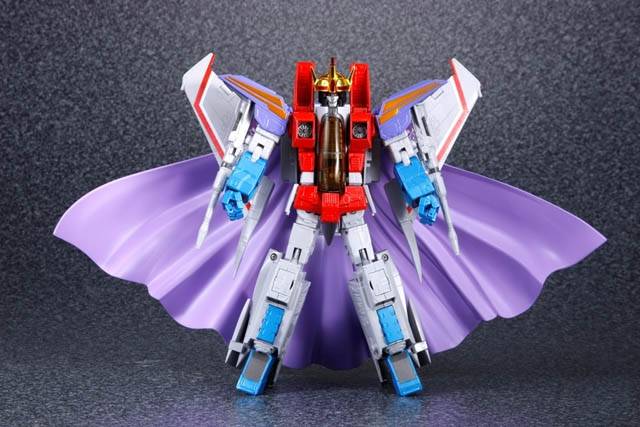 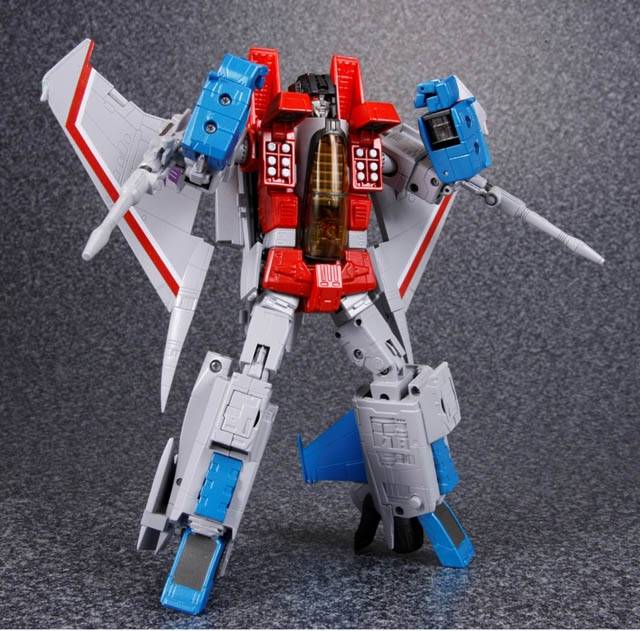 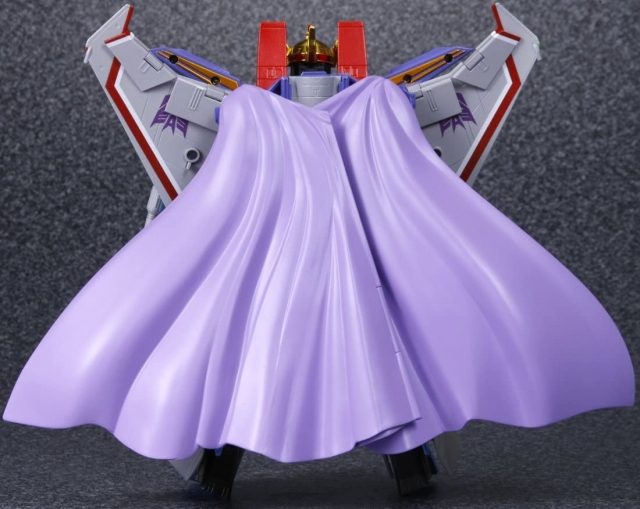 I got this figure because Iâ€™ve never owned a Masterpiece Starscream and upon opening it my expectations for it sunk. The figure is too loose, nor plugs in. Plus my copy is supposed to be MISB but it looks as if somebody else had it prior since it had very minimal paint chipping on the back of the thigh. Though Iâ€™m rather upset about this Iâ€™ll have to do until MP-52 gets here

Starscream's pathetic grovelling and weak character is what makes him stand out in the G1 cartoon. Most of the Decepticons were stoic and loyal to Megatron, whereas Starscream is a schemer, and his whiny voice made it even better. This Masterpiece toy is a perfect representation of the original and only G1 Starscream. He looks good in robot mode, transformation isn't overly complicated (like Megatron), and in plane mode, he is long and looks beautiful and sleek as a jet plane - best jet plane I've seen.

I'd been wanting to get an updated MP Starscream for a while now. I couldn't pass up this version at a great discounted price! Excellent figure all around!

First thing the head is very, very loose. Itâ€™s almost a bobble head figure. Secondly nothing taps in correctly when transforming it to the jet mode. Last but not least I had to switch the null rays to the opposite arm they came on.

After this and a few of the last Takara figures I've gotten, I'm at a point where I'm about done giving Takara or Hasbro any more of my hard earned money. Flimsy, loose, falling apart, and the plastic feels cheap... WTF?! Truly a disappointment. I think I'll be waiting out the 3rd party stuff from here on.

I'm in love with MP-11. I've been waiting for him since 2011 and I'm glad I bought this reissue. He's great and very accurate to G1 Starscream. The only complaint I have was the hands cause they looks a bit goofy but I replaced them with the KFC hands. Overall I would say buy this Starscream it's so much better in person and looks better than MP-03.

I have Skywarp and Thundercracker. You can clearly see worse quality just looking at them next to each. In jet mode Starscream has a lot of gaps and pieces not fitting square. In robot mode his hands pretty much fall apart if you touch them. I'm dissapointed in Takara's decline but still wanted to have him to have all three. Just keep him to the back if you are displaying him

I really wanted to give Takara a chance to win me over with this, but sadly no. Like the previous person had posted I actually have an issue with his hands like his right hand's socket for his index finger is warped and it just don't sit in the socket.

And lots of sprue marks were not cleaned yp very well like on the forearms and most noticeable where the cockpit hinge is.

At least he looks good on a shelf if you don't get too close.

Regrettably the worst MP figure I've received. Starscream looks fantastic in and out of the box but he's too rigid, his pieces do not fit well (and they have to be forced to separate), and the pieces are not flush so there are many parts that are "hovering" where they should be connected..The wings and fingers detach too easily from the body that I was worried he was broken.