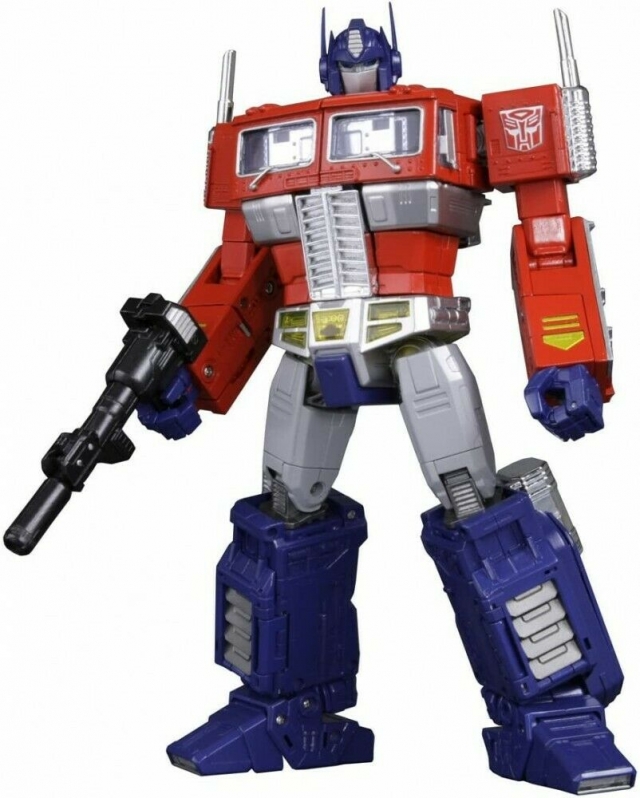 Transformers Masterpiece MP-10 Optimus Prime Convoy and Trailer is the second version of Optimus Prime to be reborn in Masterpiece glory.  Convoy features an all new more semi truck accurate grill as well as is scaled to the second wave of Transformers Masterpiece figures including the Masterpiece G1 cars, which can be stored in his trailer (cars sold separately).   MP-10 Optimus Prime is more G1 Transformers cartoon accurate and ni addition to Convoy's trailer, which can transform into Combat Deck, it also comes with Roller, a small Spike Witwicky figurine, a die-cast metal Matrix of Leadershipand an energy axe that slips over Convoy's right hand. The included Spike spike figure can ride in the cab in vehicle mode as well as in roller's seat. Roller has options to plug in Convoy's gun or pull Convoy's trailer, and the trailer itself can store Convoy's weapons in any mode.  A true Masterpiece of a Transformers figure, this second reincarnation of Optimus Prime jumps straight out of the Transformers G1 tv series and into your collection. 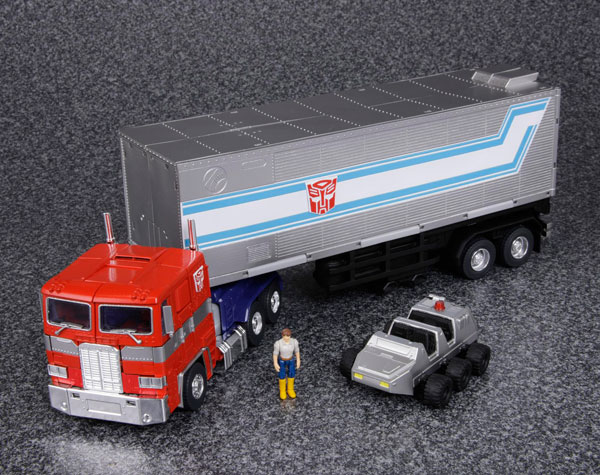 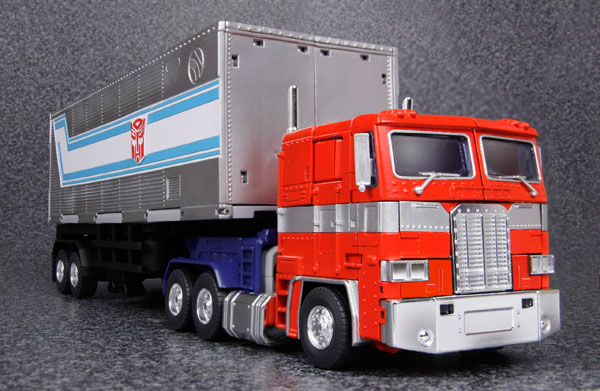 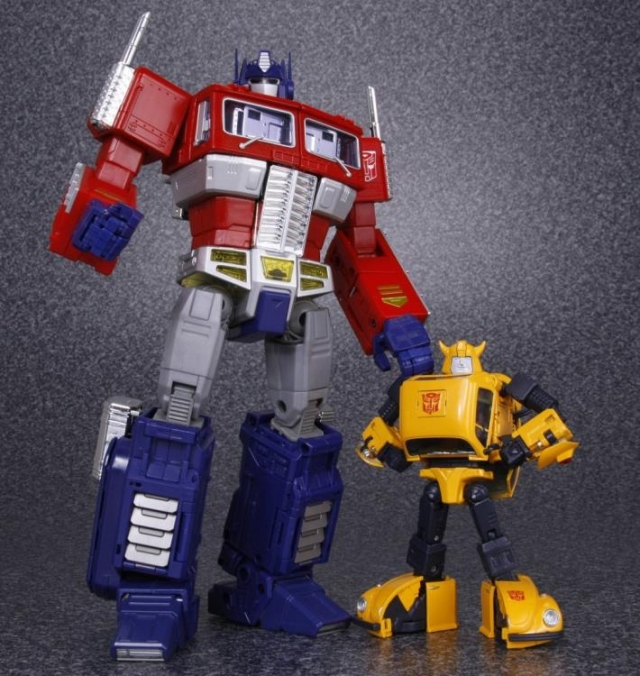 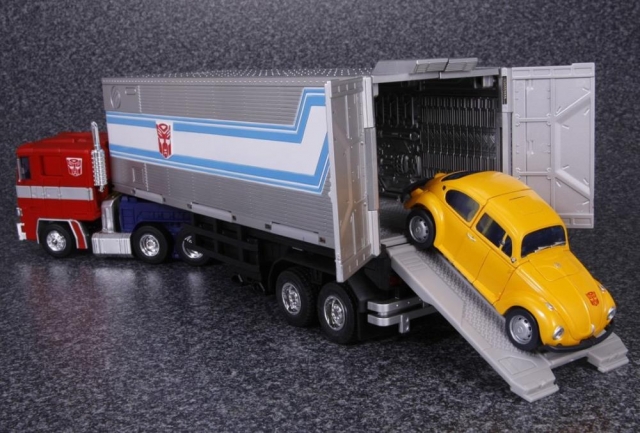 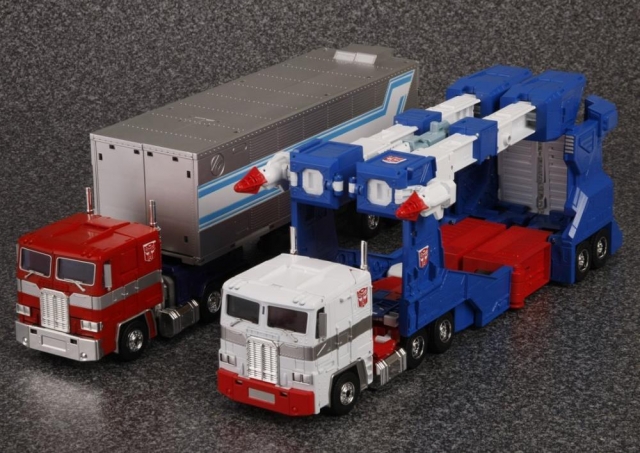 Probably the best Optimus Prime made. It scales perfectly to other figures and not too large as MP-01 was. The gun does not fit in the hand as good as I would want, and the index finger popped out, but that is the only negative I have. Not as cartoon accurate, but that is what MP-44 is going to be.

The best Optimus Prime you can buy.

By far one of the best masterpiece figures made. Not much else to say that you wont ever regret getting this figure.

This is the first MP Prime I've owned and the last time I had a Prime figure was the original from the 80's. The box is huge but when I took it out the box, I can truly see why. The figure is absolutely amazing and I can't believe that I finally got one. Besides the quick shipping, I'll gladly continue adding to my new MP collection through TFSource.

Overall the figure is great and shipping/handling is fast. My MP-10 has an issue where the left chest would not close completely in vehicle mode and end up leaving a huge gap and make the vehicle mode look incomplete.

I ordered the MP-10 Optimus Prime on the friday after thanksgiving. They shipped it out that same day and now its monday night and I have my Optimus.

The Optimus is amazing, its the ideal version of the toy I loved as a kid.

I will definitely be ordering from TFSource again.

This is the first MP i ever bought. I was blown away by the detail and craftsmanship. He looks great in both modes. Has tight joints holds his gun just fine. I have had no QC issues at all with Prime or his trailer. In fact i was so impressed with Takara I bought my second favorite Autobot MP bumblebee the next day. and have bought four more MP characters since then. if you like Optimus Prime this is the one for you. buy it buy it today it's worth the money. I HAVE NO REGRETS ABOUT BUYING HIM.

This figure is my second mp that I own. The pics online do not give this guy justice. He is a must have for any G1 fan or collector.

Despite the many incarnations of him, nothing say Optimus Prime than this figure. Despite some QC issues that I have to agree with others (especially his gun not staying in his hand) this figure looks awesome & is great to look at with his Takara counterparts. Overall, I'm happy to have this figure, & is looking forward to other future releases.

I just got this new figure, and I love it!!this is way better than the both.this was a great bday gift.the joints on this figure are great!

I have a YOTH Masterpiece Optimus, but I wanted an MP-10 for my Masterpiece Ark Crew so when the opportunity to grab the re-issue came along I jumped at the chance to grab him up.

I agree with the previous reviewer in that there is some lax in the QA/QC department. Straight out of the box, I noticed that the panels on the legs do not secure like they do on my YOTH. I haven't had the chance to transform him yet to ID any other issues, but right now it isn't looking good for the home team of Takara Tomy. I love the figure, but time will tell on how it measures up to previous offerings

A beautiful masterpiece ruined by a surprisingly low QC.
The plastic quality is not up to par, the parts do not close in together, especially the chest pieces.
The fingers constantly fall from their sockets, even when MP-10 was removed from the box; just like MP-24's broken fingers!
The trailer sides do not close up....
I am dissappointed BIG TIME