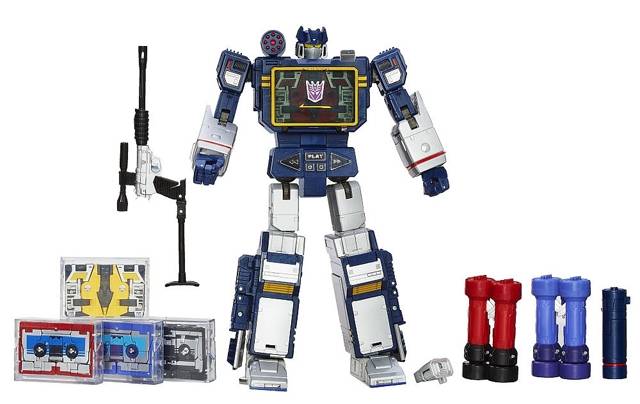 MP-02 Soundwave with 5 Cassettes is likely the greatest version of Soundwave, Frenzy, Rumble, Ravage, Buzzsaw, Laserbeak and a true masterpiece of a Transformers figure.  A centerpiece of your collection get yours at Toygeek your source for everything Transformers.

It came really fast, 4 days after I ordered

This Soundwave is almost perfect, but the big flaw that took a star off is that his cassettes do not properly fit in his chest compartment. You can get them in easily, but they are very difficult to remove once they're inside. Overall, great toy.

The paint on the shins are a little scuffed. There are also some visible sprue marks. Happy to have the figure but there should at least not be any scuffs.

This is a great set, considering the price and value here. Some red eyes certainly aren't worth almost double the money to get these same figures Takara versions The cassettes can get stuck but if you just try to pull them straight out, it works just fine.

Beautiful figure, robot mode and cassette mode are awesome. The cassettes are nice as well. The pile drivers for Frenzy and Rumble can be a bit tricky to attatch but still good figures. The only problem I have is the cassettes fitting in Soundwave's chest. Some of the cassettes like to get stuck in there. Even though he can fit three in him I wouldn't recommend it. Other than that, an awesome addition to my collection

As one of my favorite G1 toys growing up and missing the boat on buying him on the first run I'm so happy to have him in my collection!