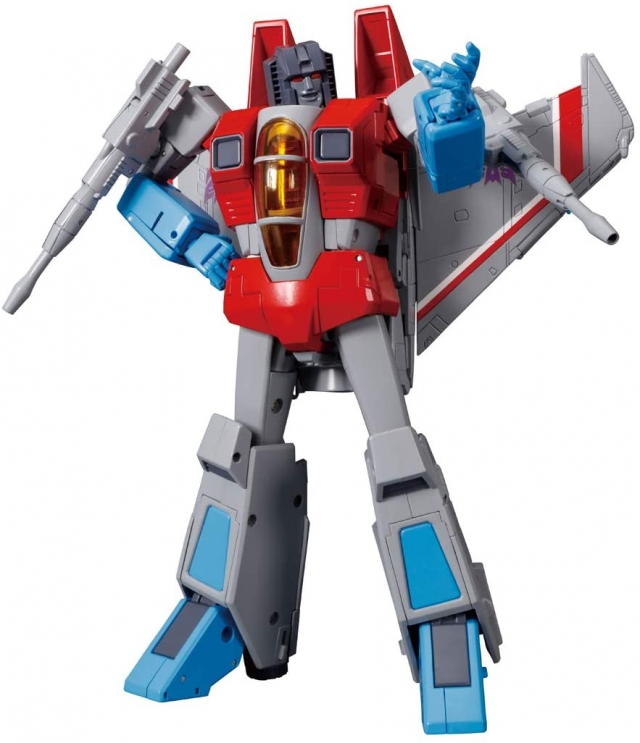 This new mold brings us a very cartoon-accurate representation of the Decepticons Air Commander with an impressive posability and a beautiful F-15 fighter mode.

This new figure will include 5 interchangeable faces, a pair of null-ray cannons, stand, stand adapter, 5 blast effects, Megatron gun, plus the drill seen in “The core” episode and the claw and rock from “Cosmic Rust”.

MP-52 Starscream Version 2.0 is likely the greatest version of Starscream and a true masterpiece of a Transformers figure.  A centerpiece of your collection get yours at Toygeek your source for everything Transformers. 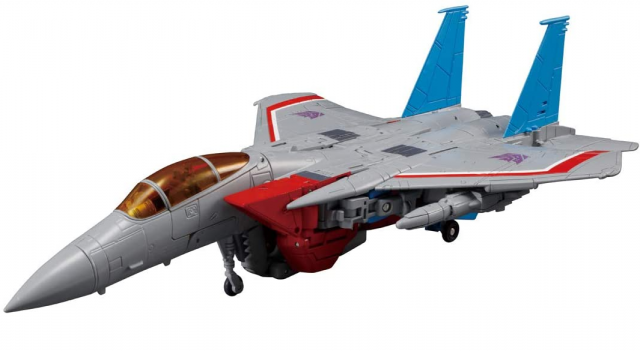 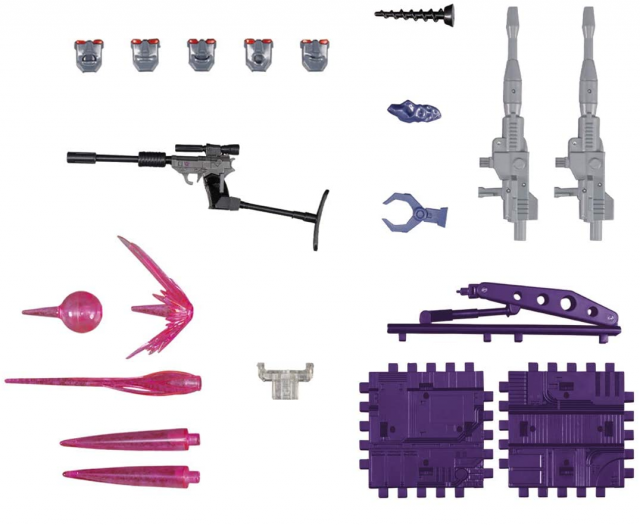 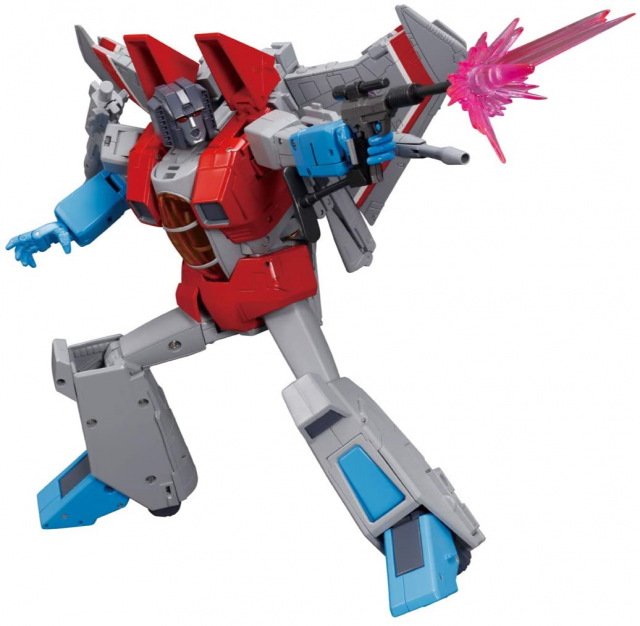 The detail on this piece is amazing

It seems most people (myself included) saw this figure and were astonished by how cartoon accurate it looks and were too quick to pay just about $300. The material for this figure is too flimsy (left arm part the gun attaches too falls off too easily) the feet are too loose and he doesn't have much weight to him. Transformation isn't too frustrating but not that good either (especially compared with MMC's figures which are smooth and simple).He's great to display with other MPs, but personally, I wouldn't pay more than $150 for this item.

Man Takara knocked it out of the park. Both bot and Alt mod are toon accurate. BEST VERSION SO FAR!!!! 10/10

This has to be the holy grail of toys, in my opinion! The most toon accurate transformer ever, especially the face, which I think really matters. Transformation is moderately difficult, but watching a video helps a lot. Mine first came with cracks and paint issues, but TFSource fixed the situation with a replacement. Totally recommended, if yours doesnâ€™t come with issues. I love it!

Let's just get this out of the way: I don't collect Seekers. However, there was something about MP-52 that I couldn't resist. Maybe it was the impressively toon-accurate robot mode, maybe it was the faceplates, maybe it was the stand, maybe it was the way the wings compressed into robot mode, or maybe it was the fact that the back actually didn't look like a total trainwreck this time (at least to me). Either way, I figured I might as well indulge in a Transformer that wasn't Optimus Prime or Megatron for once, and I'm glad I did. I was a little nervous about the transformation, but thankfully a video Takara shared made it a lot more bearable. The only other thing I kind of have an issue with is that one of his feet is a little loose, but because the jet thrusters can be pushed in and out, I found enough leeway to reinstate his stability as best as I could. And last but not least: The price. A lot of people say it's too much given what comes with it, and I have to say that I also think it's a little steep. Maybe if he came with his cape and crown it could be justified a little more (and yes, I am aware that the cape and crown do exist for MP-52, but you have to buy the other Seekers to get them, and I don't really care for Thundercracker or Skywarp, so to me, it's not worth it). Overall, though, it's still a very impressive piece that not only learned from MP-11, but also from a few more recent Masterpieces (MP-45, anyone?).

First, I'm so happy I bought via TFsource â€“ shipping was so fast, and the box arrived in mint condition with a good layer of bubble wrap. I LOVE the jet mode and felt as giddy as I did in 1985 unboxing G1 Starscream. Proportionally and design-wise, the F-15 looks even better than the photos. (I don't mind the pieces underneath. They're not realistic for an actual F-15, but they're basically cartoon-accurate). The robot mode is awesome â€“ except (1) the grey is a little too dark as they say in the video review, (2) the feet don't lock into place well enough to provide good stability, (3) the backpack/wings don't hold together too well, and (4) there are lots of little joints that seem very soft and easily bendable/breakable. Still, this is the best Starscream that I've seen, and I'm thrilled to have him in my collection.

Love it! I have a Meteor and MP-52 blows him away!! I had no QC issues or problems. In plane mode, the wheels roll as they should and you have a working cockpit. In Bot mode, flawless. Like all other MP, you need to be patient and carful while transforming, but no problems. MP-52 has a much sleeker design and looks great from every angle, front AND back. I am not disappointed with the price or quality. You want nice things you have to spend the $$$. With all these KO's and 3rd Parties, Taraka had to raise the price. No complaints, this one delivers on design and quality. Getting all 3 new seekers now.

I was looking forward to replacing my MP-11. The ankle joint was cracked even before I took it out of the box. After paying such a high price, I demand better quality. Takara dropped the ball AGAIN. Iâ€™m getting a refund and getting some nice 3rd party stuff. Iâ€™m angry and disappointed. TFS offered an exchange, I donâ€™t want another expensive lemon.

The transformation is quite involved with the wings and the cockpit. But everything feel natural to me.

The canopy is very fragile, handle with care.

The stand is cool for jet mode but useless in robot mode. Still it is very nice to have.

I try to have the most toon accurate pieces for my collection, and this filled the void for me. MP11 and Meteor didnâ€™t cut it for me (even after trying the head adapter to display them with the head that came with MP44). This hit all the right notes for me, and my copy did not have any QC issues. For me, the price was well worth it, but SS is one of my favorites. I love the sculpt and enjoyed most of the transformation (I was pretty nervous rotating the nose cone), but that is probably my only gripe for the figure.
If you purchase this, hope that you have as good of luck as I did and donâ€™t find any QC issues. I was pretty nervous after watching some of the reviews. Mine turned out great though. Looks like Iâ€™ll be replacing all my seekers as they continue with the repaints.

Got my Starscream in and was immediately blown away !!!!! Takara knocked it out of the park and is one of the best sculpts done !!!!!! Transformation was very easy even with the instructions as well as all joints being tight. I have heard talkings about the lack of a waist swivel but it is no issue, Screamer has other poses that make anyone forget about the lack of swivel. I definitely recommend this as the definitive Masterpiece Starscream and definitely worth the price for sure !!!!!!!!

Itâ€™s fine. Itâ€™s better than MP-11 by a country mile. Problem are, objectively, the price for what youâ€™re getting. Posability isnâ€™t great, especially in the leg area. Jet mode is pretty lackluster as well, especially on the bottom. Then thereâ€™s the price... Donâ€™t pay 300 for this. The price just magnifies any problems the figure has.

I will say this though, the robot mode looks great and the transformation is fun. The most G1 accurate Starscream Iâ€™ve seen. Just, again, not worth that hefty price tag.

Solid inducement from me. I can't wait to complete the set! ðŸ˜œ

Donâ€™t allow my title to deceive you. I love the way this figure looks and transforms in the reviews Iâ€™ve watched. The reason Iâ€™m giving MP-52 two stars is because the left foot on my copy was damaged, and currently awaiting TF SOURCE to get back to me.

This figure is an amazing representation of my favorite Transformer and I love it so much. The transformation and pricing suck but good lord is this great

Cons: The figure is OVERPRICED for what you get; its not heavy at all; i don't think there are any metal parts so no reason for it to be $274.00; the accessories are not that great. Transforming him back into jet mode can be troubling due to the tabs..they got to be juuuussssttt right!
Pros: The transformation is an adventure; not too easy but not to difficult just tabs will irritate you. nice ratchets in the arms and legs and knees; color scheme is well painted and he is not heavy so holding him while you transform him is not a problem; love how the nosecone goes into the chest; he also seems to take a bit of transformation from every starscream that has come out. I still think he is the better buy than maketoys but you be the judge; no regrets in getting him; i took a star away because of the tabs

The robot mode is decent but it's way overpriced and the jet mode isn't that great.