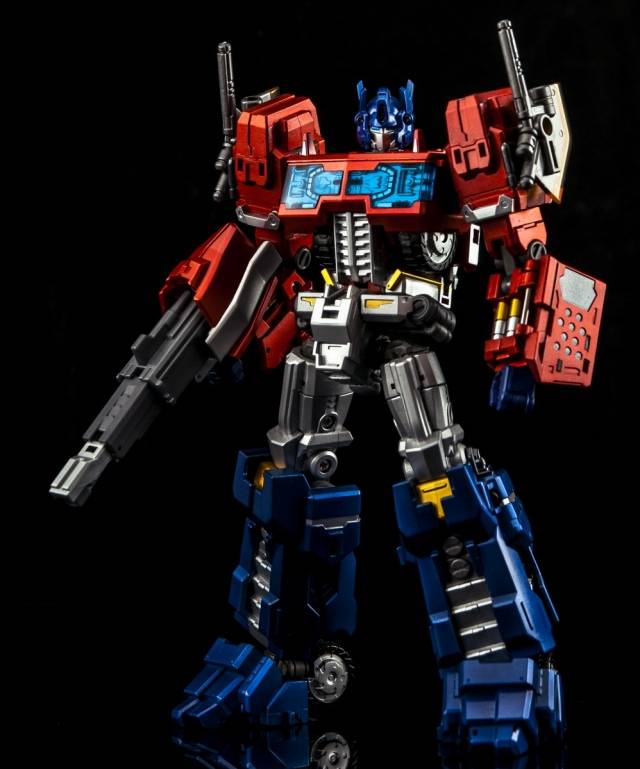 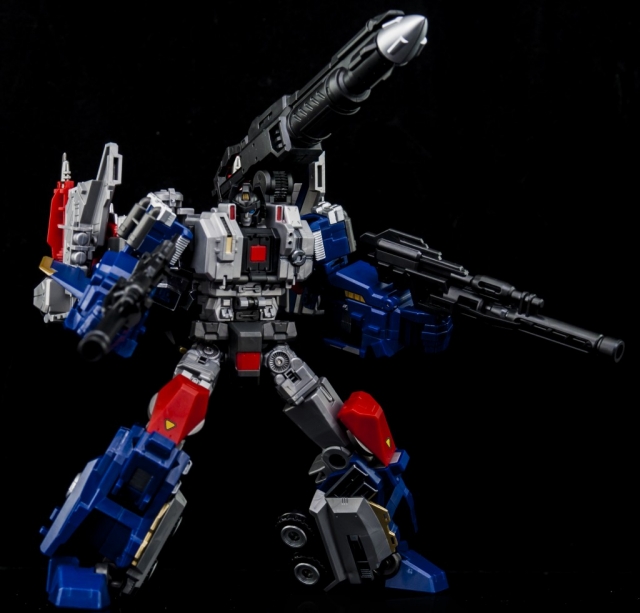 Make Toy's figures take your collection to the next level with MTCD01P Striker Manus Premium Version, a Cross Dimension Scale 3rd party figure that transforms from Semi Truck to robot and back.

MTCD01P Striker Manus Premium Version stands approximately 7.5-inches tall in robot mode and scales to other figures from Make Toys and to other Cross Dimension Scale figures.  Make Toy's figures are fully transformable, offer a high attention to detail, and are made of high quality ABS plastic and some even include die-cast parts. 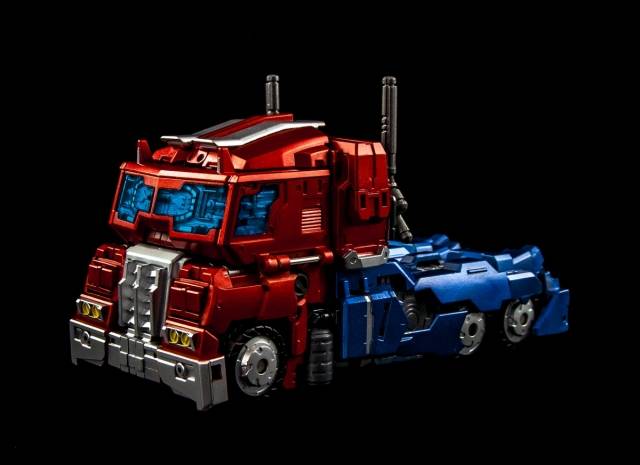 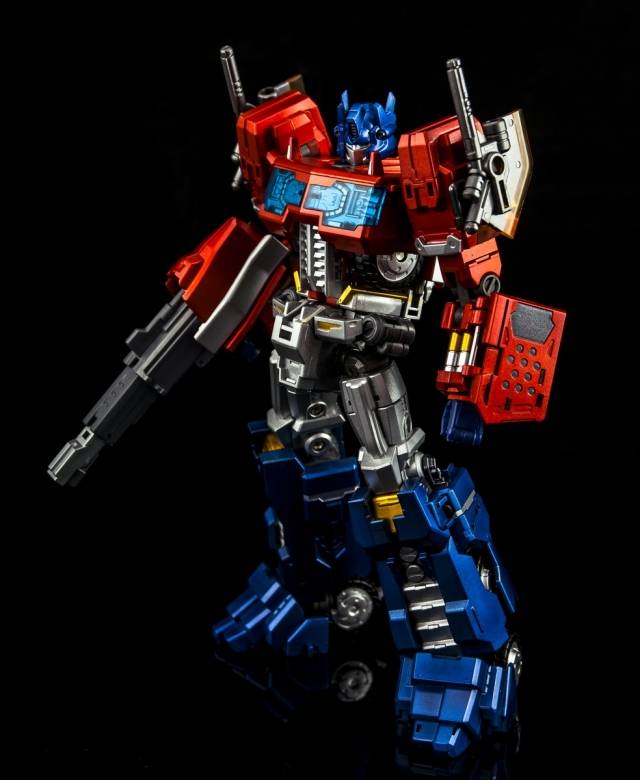 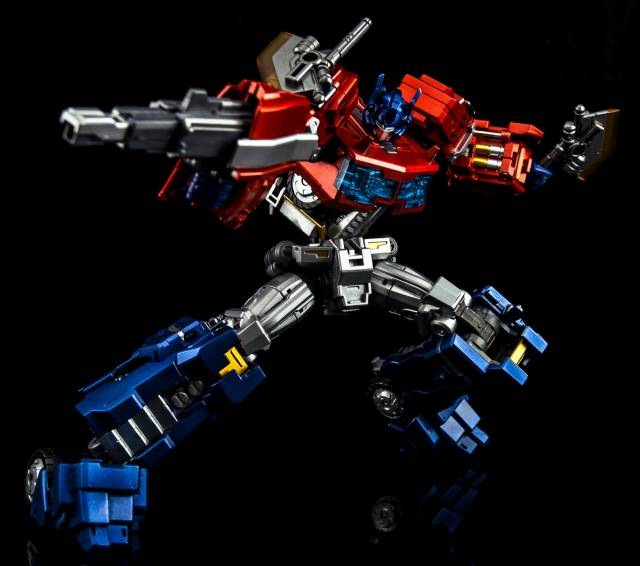 Striker Manus (Premium Edition) as a figure is amazing â€“ heâ€™s incredibly posable, remarkably stable, and possesses an imposing attitude from his proportions and fundamental structure. PE Striker Manus as a truck is the love child between Kool-Aid Man and the Terminator, thatâ€™s how unsafe walls and enemy cybernetics are when this truck gets some momentum behind it (or thatâ€™s how itâ€™ll feel in your hands, anyway). The main gun and mini-axes even work as part of the truck mode, which is a little extra service that I truly appreciate.

But the process in between figure and truck â€“ you know, the whole â€œtransformationâ€ business that made these kinds of figures so popular in the first place â€“ is an exercise in determination, manual strength, and above all Patience. This guyâ€™s folds and turns may require precision force that, if not applied perfectly, can feel like youâ€™re about to break your expensive new toy. And the worst thing is thereâ€™s a chance you WILL break your expensive new toy! I gave up at â€œclose enoughâ€ trying to get his feet fitted into their truck mode, and I straight up bent an arm hinge needed to fit the truckâ€™s side window into place. I was able to bend it back but I consider myself lucky here, and am willing to bet not everyone who tried to transform it succeeded. YouTube is your friend, there are plenty of videos to walk you through the tricky bits. Donâ€™t be afraid to use sandpaper if a groove doesnâ€™t accept a ridge or some other small issue â€“ so long as youâ€™re careful, it wonâ€™t scuff up anything that shows, and a break waiting to happen becomes a tough but manageable step.

Now aside from the base figure and its standard weapons, the Premium figure comes with the arsenal first packaged with Striker Noir, and thatâ€™s a big arsenal: several variations of swords, a polearm, pistols, submachine guns, an Iâ€™m-not-kidding gunblade, and also his not-quite-trademarked blaster rifle. Striker also has a certain axe from a certain scene of a certain movie, and as with every other bonus weapon it can fit into either handâ€¦ just not well. Rather than attaching to the hand in any way the hand just grips whatever you put in it, and most things fit loosely at best. If you have access to glue dots (fabric and craft stores should have them), this ceases being a problem.

It's not a good feeling to hear that a figure already polished need further polishing, but based on my own experience and other reviews, this figure isnâ€™t as rugged as it looks. Either in spite or because of this, I confess feeling a sense of accomplishment when I finally finish transforming it one way or another. It may take some tweaking and breath-holding to get the pose you want right, but when you do itâ€™s epic. No one will blame you if you get frustrated, but so long as you can work through that it should be worth your time. Now if MakeToys would just issue a Premium Edition Despotron to square off against PE Striker Manus, Iâ€™d definitely buy it.

So I have now had 2 of these and both broke on me. First one tab on the bottom of the feet because it was way too tight, second one, 1 of the 2 tabs on the shins would not go in and it came not being tabbed in while the opposite shin did so I tried and when only one of the 2 tabs went in it angled the adjacent armor piece and it broke off like it was held together by Play-Doh. Very flimsy plastic is used for these I would avoid this product. Unless I just got incredibly unlucky which I suppose happens but I doubt it.

This is my second Striker Manus because I also have the original version. If you're going to only get one, I suggest this one because the metallic paint is a game changer. Both modes look great, but transformation was a bit on the painful side. I especially had a hard time getting his right foot tabbed in for truck mode, which was the painful part. (literally) But, I got it eventually and the rest went well. Aside from what you see in the product images, this figure also comes with a large assortment of weapons, which actually have to be assembled. Six additional guns, and several swords, as well as some other bits for attaching the weapons together or to the figure. His Energon ax does stay on, but it's a friction fit and can come off easily. But, the figure looks fantastic and is highly posable. In my opinion, this is how a Cybertronian mode Optimus Prime should look. Also, if you collect in the CHUG scale, he fits right in. So, a few minor issues aside, this is an excellent figure.

I was very ecited and I wanted to display him fighting rioter desportron with his energon axe but he can't even hold the axe at all. The axe doesn't click in, tab on or anything it literally rests on the end of the folded up hand and there is nothing holding it on so gravity wins. I was surprised as to how much extra weapons he comes with but the instructions show things that are impossible and don't show how to build the axe even thought its very easy. Im gonna look on google and see if I can find a fix for the axe. Other than that the paint is nice but the wrists on mine are loose and the feet don't have enough area to keep him up without some clever posing