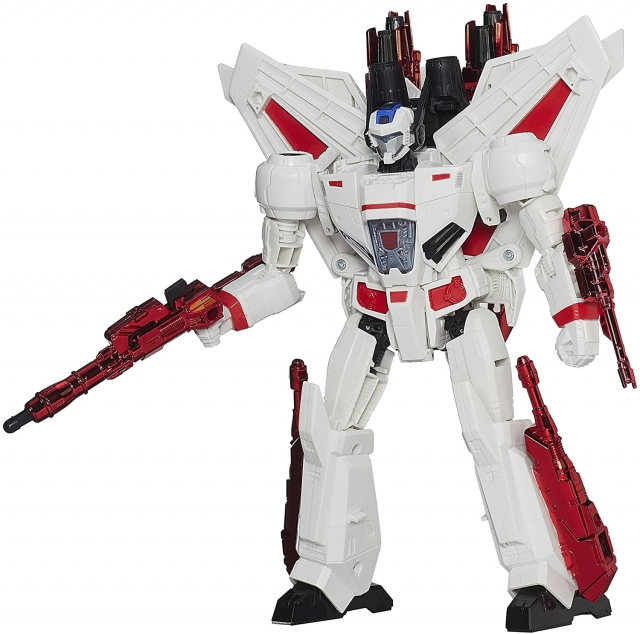 The Transformers Generations line continues where the classics line left off, bringing forth more modern versions of legendary bots from the G1 days. Each figure is reminiscent of the Generation bot from the same name, with a more modern styling and a great likeness to the heritage of each figure.

Bring home a big, transforming jet from space! The Transformers Generations Thrilling 30 Leader Jetfire stands tall above all Autobots, and this massive scientist features swappable faces - so he can look like Jetfire from his many various reincarnations on Cybertron and elsewhere. With huge chrome red guns and giant engines, Jetfire can travel the galaxy with his photon missile launcher and hunt down Decepticons while mapping space for Cybertron.

Jetfire is a bot of science, literally. Not only is his mind dedicated towards scientific pursuits, but his body is a testament to the technology he studies so intensely. (Some would say "religiously", but not in his presence.) Every inch of his chassis is cutting-edge and kept up-to-date. However, he does not have the trust of his teammates; it was not so long ago that he was a Decepticon. Jetfire is compassionate, so some Autobots feel that he could be soft on their enemies or, even worse, he may turn on them after realizing his "cold calculations" swing the other way.Jetfire would find their misconceptions about science appalling. After all, is not science just the pursuit of truth? And truth, he maintains, walks hand-in-hand with liberty.

I really like Jetfire. he is my favorite figure and this sculpt is the second best I have. the sculpt and accessories are excellent and the transforming a breeze.

As far as the figure goes I'm very happy. The coloring and detail are great. It bridges the gap between the original toy(which we all know was a Veritech), and his cartoon looks. It is highly poseable, the joints are solid but not overly tight, and the removable battle helmet gives you a variety of views. The transformation sequence is complex, but not hard to figure out, though I would think this toy would be better suited for play for an older child. It also requires a fair amount of tabbing things in, which is not difficult, but a bit fiddly.

The accessories were a minor letdown. While they were cool, and can be combined and mounted in a variety of ways, which is great for display, they were all colored with a shimmery lighter red almost metallic color. I would have preferred them a more matte red, or with the barrels coming in the brownish gun metal cover. The ones I got were all red. While it isn't a huge deal, it was the biggest drawback to me. In addition the trigger to the missile launcher is inconveniently located and very sensitive. I fired and almost lost the missile five times by accident while trying to mount it on him in jet mode.