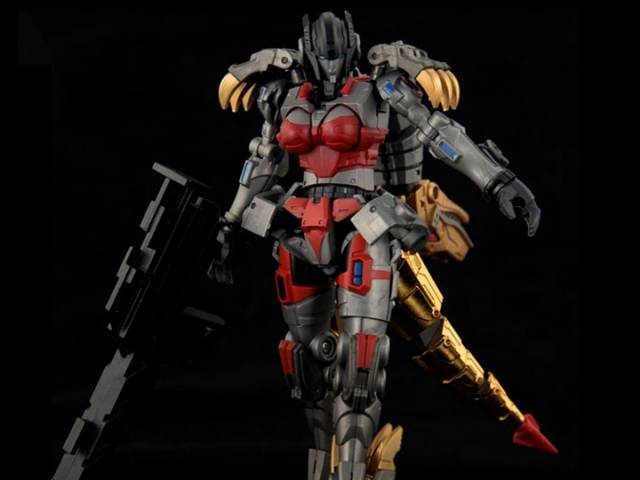 This reptilian robot is charming, cunning and ready to bite when you least expect it. The latest in FansProjets’ Lost Exo Realm line, the LER-05 Comera figure is a remarkable feat of modern manufacturing and precise engineering to rival many other prehistoric ‘bots on the market today.

Featuring an updated mold and design, this figure is the perfect addition to your Lost Exo Realms collection. A dark red highlight covers her metallic gunmetal form, while a gold chrome plating fills in sections of her arms and legs, while adorning her entire tail in dino mode. Comera’s alternate form is a calculating, deadly velociraptor with poseable claws and an appetite for the sparks of its enemies. While in dinosaur mode, she looks great standing side by side with other figures from the Lost Exo Realms line and in her robot form, she’s more than capable of holding her own in battle.

Straightforward transformation between modes, durable construction and an array of accessories round out this amazing figure, making it an exceptional value and a worthy addition to a Lost Exo Realms collection. Accessories include two deadly pistols, two large rifles and an orange energy sword for those times when the claws just won’t take care of the problem. You’ll want to snag a Lost Exo Realms Comera from FansProjects dinobots before they go extinct.

Additional Lost Exo Realms figures are sold separately, but you can dig up a great deal on this figure today at Toygeek.com, your source for 3rd Party Figures collectible figures.

amazing sculpt and paint apps and overall just a great fig HOWEVER first thing you should do before even attempting to transform this figure or even pose her. Remove the feet entirely by unscrewing them and add lubricant to the ankle ball joint. The reason for this is its ridiculously tight and the ankle peg is only half molded onto the figure. So, put two and two together and the figure has a quite literal Achilles heel that causes the ball joint to catch in its socket and her foot will just twist off if you don't do this.

She's pretty cool; it's definitely a well made figure and it's cool to have a female dinobot. However, I could do without the boobs. I'm not sure why they're there.

Wow wow wow. What can I say? This fig is very well made and sturdy. Paint job is very well done. Simple transformation and just an overall gorgeous fig. Iâ€™d buy an entire line if you made them!

I pick up Comera and her sister because I wanted more dinobots! Comera is pretty great figure. Yes, her hands can be seen in dino mode, yes there is not a lot of articulation in the neck and head (In dino mode). But if you can get past those little hiccups, she's great. I read that she has a problem with her feet breaking off if you use too much force. I suggest loosening the screws in her feet a bit to help alleviate this problem. A great add to your collection!

This is not a bad figure she looks nice and looks great next to her fellow lost exo realm dinobots and looks good next to her dinobot sister. Yeah the hands are visible in dino mode but ehh that's okay. I do wish she had more places to store her weapons and had a way to connect to the rifle stand in robot mode. If you see her on sale I think she is worth the price. I got her and her sister for like $70 during black Friday week and im pleased.

A very good third party figure. Great size and detail for the price. Only issue is a lack of a bicep swivel but its made up for with other articulation in the arm. Happy with my purchase

This is a good looking figure, and adding to the dinobot collection made me really happy.... But, this thing has the worst transformation, everything on my figure is really tight and after just 2 transformations both feet just twisted right off... i had to glue them back on and can no longer transform her..
This happened on both of my female dinobots.

BE CAREFUL!! or just display them

First off let's get the couple of gripes about this figure wich brought my score down to a 4. The head in robot mode is a little stiff and limited in its swivel angle. Next,there are a couple of places on the figure that are delicate,elbows,claw/shoulder pads. But as long as you take care neither are a huge problem. Now the good...it's an awesome freaking Dinofembot....wanna girlfriend for you're 3rd party grimlock?she fits in with almost any 3rd party dinobots made.The weapons are really nice and the two rifles combine to make a stand for her in raptor mode.So,if you're a dinobot fan,a fembot fan or just a fan of cool transformers then I recommend this one,as well as her sister figure

A raptor and a female. That's about as cool a choice for a 5th dinobot as I could imagine, and wow did Fansproject do it right with Comera.

To get the only negatives of this figure out of the way first, the biggest is that her robot hands are visible in raptor mode, but it doesn't ruin the mode or anything IMO. At first I also didn't much like that her head, neck, and tail only had up and down articulation, but then after looking at my other 5 3rd party dinobots only a couple of them have better articulation in those places then Comera, so whatever.
As for the good, robot mode articulation is nice, making some real cool poses possible, and there are multiple ways to position and transform her back kibble parts to your liking. I think almost every option looks pretty cool.
You can remove her raptor claws and put them on her shoulders as cool looking shoulder armor, but if "parts-forming" bothers you you don't have to and they look fine on the backs of her forearms too.
There are 4 places to store her weapons in bot mode, 2 on her back and 2 on her hips, and those all look good.
Much how the other Dinobots have color schemes that invoke a sort of wrestling singlet outfit look, or a muscle shirt and man-panties look, Comera fits right in with her wrestling diva corset and bikini bottom color placement.

Because of the visible robot hands in raptor mode I'd give this a 4.5, but If I have to choose 4 or 5 I'd say 5. A very welcome addition to my Dinobots.