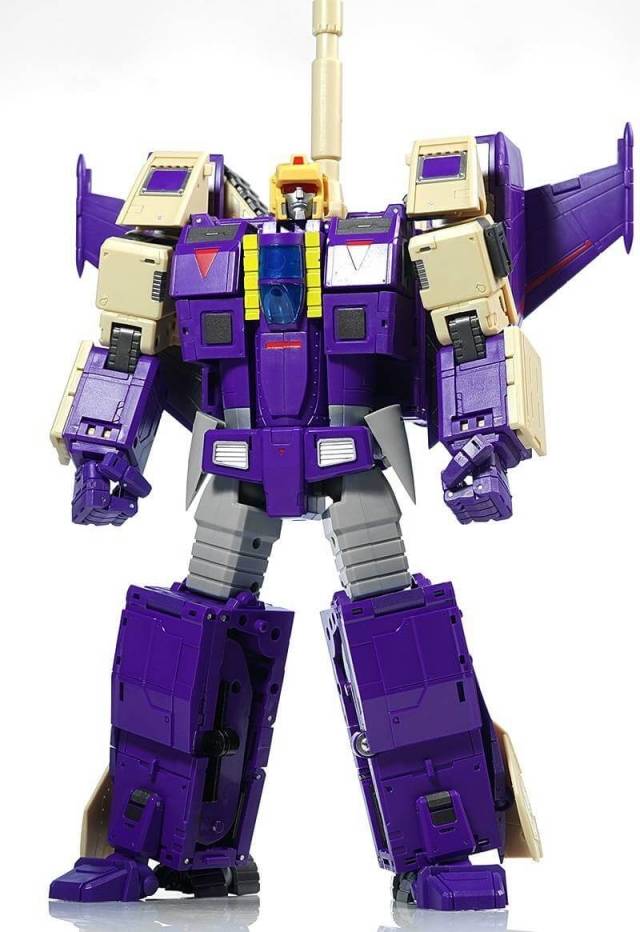 DX9 Toys figures take your collection to the next level with D08 Gewalt, a Masterpiece scaled 3rd party figure that is a triple changer and transforms from tank to robot to plane and back.

D08 Gewalt stands 9.4 inches tall in robot mode and scales to other figures from DX9 and to other Masterpiece scaled figures.    DX9 Figures are fully transforamble, offer a high attention to detail, and are highly articulated, with figures made of high quality ABS plastic and some even include die-cast parts.

This IS Blitzwing. He looks great in all three forms. I've had no issues with mine. DX9 made a great product with this rendition of Blitzwing. Pick him up before you miss your shot.

Good durability, nice strong joins, quick and fast shipping. Only concern is that the figure is missing a left side breast panel. Was shipped with two right side panel instead. Don't know there's away to aquire the left side or how to get is replace. Other then that good figure added to my display

Gewalt was my first MP scale figure. He's big, heavy, and bulky. The part separate tool that came with him is pretty useful dealing with other figures with intricate transformation. I got him at $120 which is a pretty good price if you ask me. Bot and Jet mode look fantastic.

Tank mode is a bit weaker with a few gaps and visible head syndrome kinda. The downside is he isn't cartoon-accurate but you can still tell who the character is immediately. I personally like the panel line and mechanical details, if you don't, they are not that obvious in the distance.

Definitely a decent cheap option for blitzwing, I'm comtempt with this guy as my blitzwing. But get fanstoys or KFC if you want more cartoon accuracy. (fanstoys more pricey and KFC has stability issues I heard)

I feel this guy is a great addition to my collection. He is solid and imposing. He scales well with my other Masterpiece scaled Decepticons. At first I was on the fence, but I'm really happy I changed my mind. If I had to give any negatives, I just wish he came with missiles to plug under the wings in jet mode. Also he has bad visible head syndrome in tank mode. These are small gripes that I can easily get over though. In all I feel this is a really well done interpretation of Blitzwing!! As we all know, your mileage may vary but I'm very pleased!!!

Addressing some points in previous reviews, the elevators are an afterthought. They did not appear in the instructions, nor the artwork. Now that's out of the way... On to the review!

First off, the tank mode. While yes it is the weakest mode, it is still playable as a tank. And there is no denying that it has presence, being not only purple and tan, but also really heavy. It rolls, the turret can swivel, and the gun can elevate.

The jet mode, at least for me, is by far the best mode for (dis)play. The minimal paint apps and the blockiness have made me spend more time than I would care to admit picking this tank of a jet and swooshing it around. The blue of the cockpit pops against the purple and the presence of him... He makes my MP-3 Starscream feel small, even though he's not much larger. About an inch in every dimension.

The transformations, while frustrating sometimes, is generally fun. Going from robot to jet is fairly easy, but the stiffness of some parts and joints can sap some fun. Luckily, the included part separator makes quick work of those parts. Everything tabs in snugly, and I don't exactly have much to say other than that I have nothing major to complain about.

Finally, robot mode. He is big, tanky, and he has presence. Like the dastardly destron I am, I play with my transformers with other figures. He looks particularly imposing against my Frame Arms Jinrai, and the two look stunning together. I suppose at this point I'm rambling.

Thank you for your time,

I got him on his first run, and boy, he is AWESOME. He is big, transforms nicely, poses well, has great articulation, and looks wonderful. The only complaints are echoes of other reviews, the side tail fins are kinda lame, and the tank mode couldâ€™ve been made to look cleaner. These are very minor complaints for a very major figure. This is Masterpiece Blitzwing, in your face.

He is the middle linebacker to my collection. Great in all three modes, one of the best triple changers

My copy of Gewalt was a little stiff at first with some of the joints. DX9 included a pry-tool which works REALLY well. Everything loosened up after a day or so of transformations. Best MP Blitzwing around. Would buy again, highly recommend!

This was my second DX Transformer (the first being "Mightron") and the first Transformer I ordered from TF Source.

Ease of payment/expeditious delivery aside, I'm very impressed with this figure all around.

The tank mode is a bit underwhelming in my opinion. They tried to match the G1 toy/animated character with it, and while I appreciate that, it comes across as more "cute" than intimidating.

The jet however is phenomenal. That sucker has some presence to it. I prefer displaying the figures as bots, but I may have to make an exception to the rule and have Blitz--I mean, Gewalt -- grace my shelf as a jet from time-to-time.

Speaking of the bot mode, I don't have enough space to talk about how amazing it is. It has weight, it has mass, it is the shizzle.

Transforming it was a breeze. I was a bit intimidated when I saw he came as a tank, and that I would have to go through two transformations to get him to a bot, but it wasn't hard at all. I've had a more frustrating time transforming Combiner Wars/Titan's Returns toys.

Another nice feature is that Gewalt comes packaged with a little "Transforming Tool" that you can use to pry loose those tight fitting segments (think of it like a Lego brick-separator, only for Transformers).

Anyway, this dude is aces. If you're a fan of the character, and if you want a big baddie to grace your shelf and dominate the Autobrats, you'd be hard pressed to find a better choice for this price.

This figure is so unfair to the other 2 triple changes I have, that being "Astro Train " and "Octane". The size of it is great. It seem like it was double. I hope more masterpiece figures get that size boost in the future.

I'd give this guy 5 stars, to be perfectly honest. I know well the gripes that people have concerning this guy, the most notable of which is the visible head in tank mode, and the lower chest panels popping off in bot mode. The visible head doesn't bother me at all, and truthfully, it is my opinion that only a knitpicker would really allow that to be a deal breaker seeing as how he is a triple changer, and all three of his modes look really good. As far as the lower chest panels popping off, it is true that they can pop off easily during the course of transformation, but they pop right back in. After you get the hang of transforming him, it will cease to be a problem because you'll understand that those pieces are delicate, and so you're simply be more cautious with them. Overall, the transformation is complex but fun, the plastic is really high grade and he feels really sturdy. He's got a good amount of di-cast in him. The piece that essentially connects his torso to his legs is one solid di-cast piece, and his tank turret also contains di-cast. Face sculpt is great, and I, unlike some, enjoy the light-piping for the eyes. He comes with an alternate "rage face" as well. The two sets of stabilizer fins on the rear of the jet mode, (his legs), do have a very minor clearance issue, but you shouldn't have a problem with transforming it after playing around with it a bit, and almost every Masterpiece or Masterpiece scale figure has a clearance issue of some sort. It's inescapable when it comes to this sort of engineering, really. I'd definitely recommend this guy. He feels really high quality.

This figure is a fantastic Masterpiece-alike Blitzwing. All three modes fit together wonderfully, and he looks beautiful on display with a Masterpiece collection in any mode. He does have a few flaws however. The rear tail-planes in jet mode seem to be added as an afterthought, and get in the way of folding up the fins on his legs. His forward landing gear comes loose quite a bit, but that may well be just my copy. My last complaint is due to my own stupidity more than anything: The nose-cone is painfully sharp, so be careful!