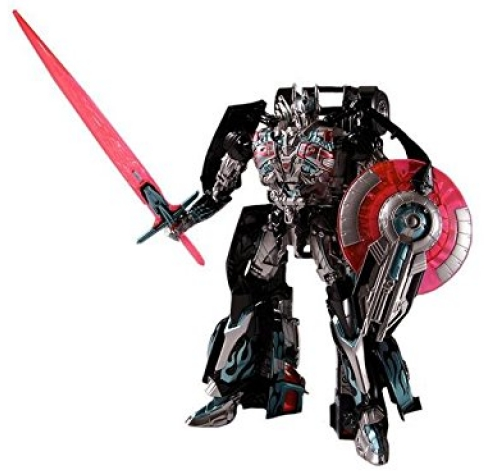 A new era in the epic Transformers saga begins with Transformers: Age of Extinction. Three years after the Battle of Chicago, the war between the Autobots and Decepticons rages on with the fate of Earth hanging in the balance. This First Edition Optimus Prime figure is the first to feature the Autobot Leader's reimagined design featured in the fourth live-action Transformers movie.

This 10-inch-tall Optimus Prime figure converts from a robot warrior to a semi truck and back again. Change from robot to truck mode in 15 steps and roll out. Reverse the same 15 steps to change back to robot mode and gear up for battle with the included Sword of Judgment and Sentinel Shield. It's the first Optimus Prime figure to feature the Autobot Leader's look from Transformers: Age of Extinction.

The battle against extinction begins here! As the Age of Extinction dawns, the Autobots find themselves fighting powerful new enemies from both Earth and beyond. The Autobot Leader Optimus Prime charges back into battle with a new alternate mode, a new design, and new weapons. This 10-inch tall Optimus Prime movie figure comes with the mighty Sword of Judgment and the battle-forged Sentinel Shield. Kids can imagine they're defending Earth with the heroic Autobot leader. This is also your first chance to bring home a figure inspired by the Transformers: Age of Extinction movie. It's not only the first edition of Optimus Prime, it's the first Age of Extinction edition of any Transformers robot!