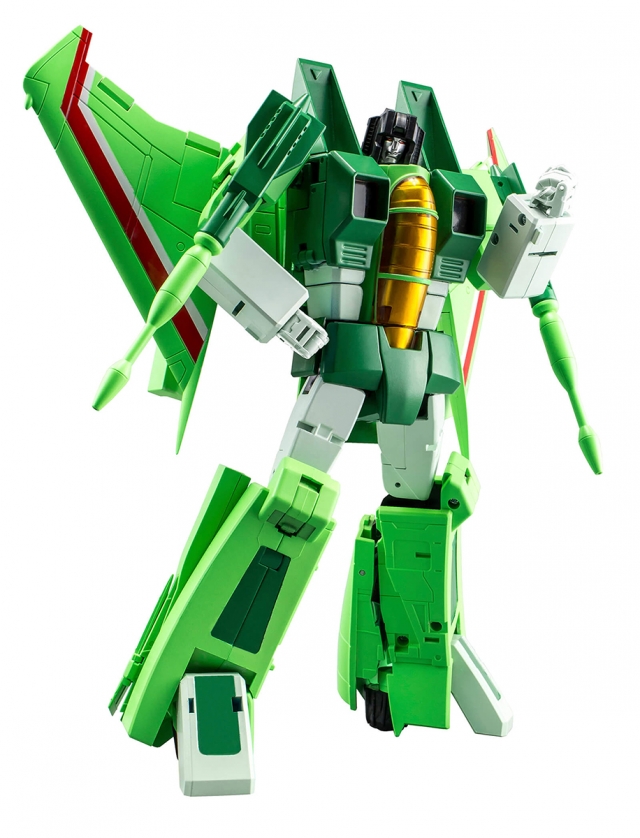 MTRM-EX01 Acid Swarm features a distinctly neon green color scheme with dark green accents.  Included with this figure are both acid spray and laser beam blast effects which can attach to the ends of his null rays allowing for recreating collector's favorite scenes.   Blast Effect parts can detach from Acid Swarm and are compatible with and can attach to Make Toys Meteor, Skycrow and lightning figures null rays.   MTRM-EX01 Acid Swarm comes in deluxe collector's edition book style packaging, and is an extremely limited edition collector's piece limited to just 500 pieces.

Quakewave is developing new variations of Energy formulas to enhance his loyal squadron of air warriors.  These new Energy serums modify his test subjects with all new, vastly powerful abilities.  However, the side effects of the new Energy are dangerous to its host, causing the enhanced warriors to become unstable and volatile when their newfound powers are overused in short periods.

Acid Swarm has been infused with the new Acid Energy giving him the ability to attack his adversaries with a corrosive blast as well as the power to conjure acid clouds to form in the upper atmosphere which unleash a deluge of armor eating acid on everything beneath it.  His known weaknesses are anti-acid and water blasts and his tendency to exceed his Acid Energy usage, which causes his own body to begin to corrode.

Make Toys Re: Master EX MTRM-EX01 Acid Swarm is an extremely limited edition figure.  A true rarity and masterpiece in your collection get yours at Toygeek your source for everything Transformers and 3rd Party. 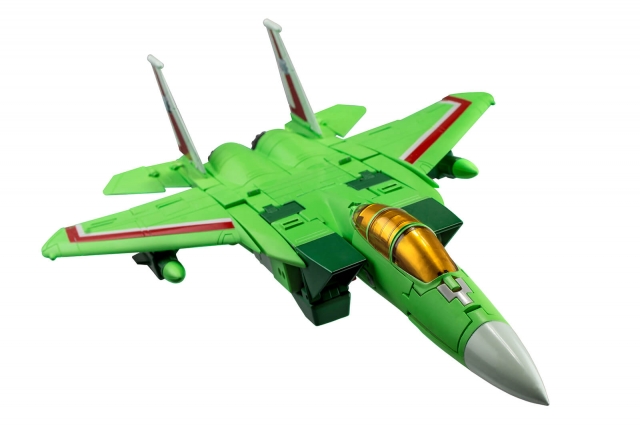 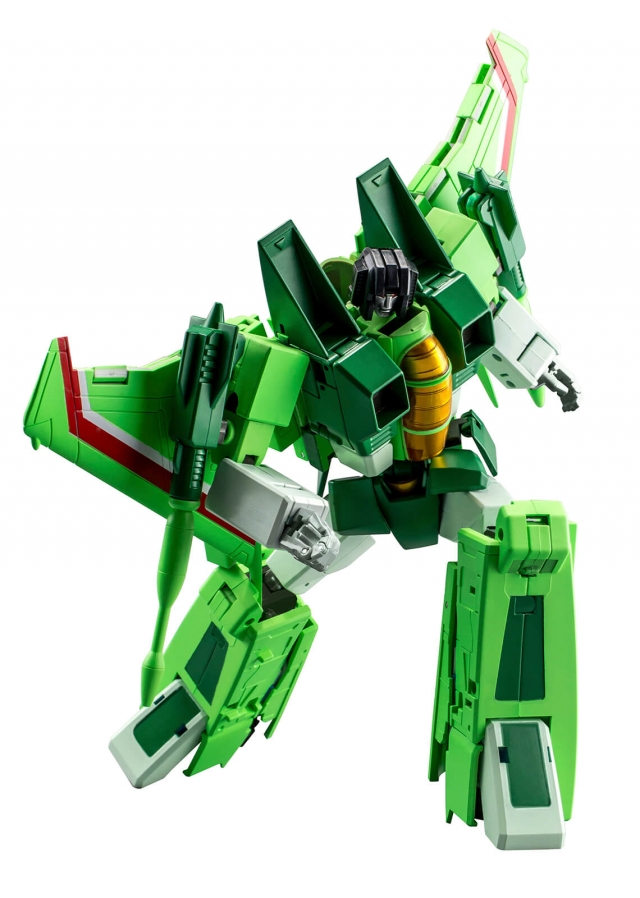 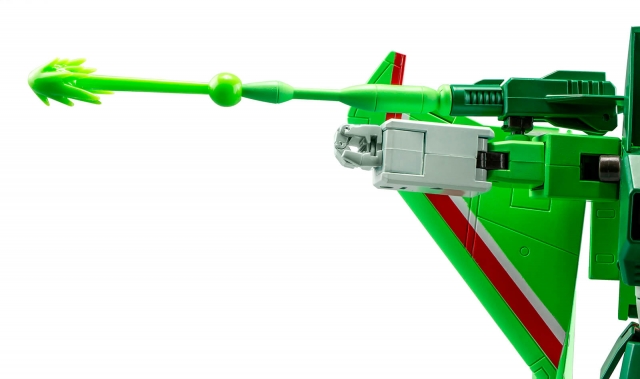 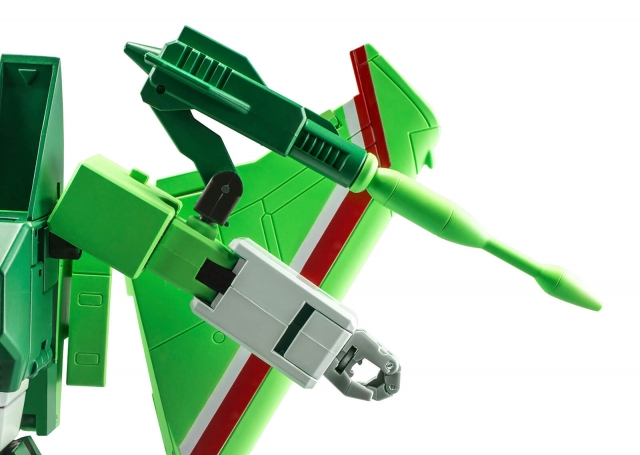 Make Toys Re: Master EX MTRM-EX01 Acid Swarm's laser cannon's are adjustable on his forearm and can pivot

Further, my version had nice-and-tight joints (absolutely no mold degradation), and everything pegged in perfectly (I still abhor the butt-flap though).

This stellar, 3rd-Party seeker will make a superb addition to any Transformers collection in either mode!

This is a great figure and the blast effect parts make it all the better to pose
I love the bright green with the darker green tones, really makes both the jet mode and robot mode pop

My one gripe is that my box came damaged
Figure was perfectly fine with nothing missing, I'm sure there must've been complications and I just so happened to be unlucky,. This is still such a great figure and looks great along with my other maketoys figures

To start with the robot mode is very poseable but that comes with MAJOR issues in jet fighter mode. The lack of any printed instructions made it very frustrating. Luckily this YouTube reviewer (https://www.youtube.com/watch?v=8Blm4yJzjrE&t=3s) (start at 4:40) showed how to do it. However it was from fighter jet to robot, and it comes delivered in robot mode so you have to watch the review in reverse to figure it out. The hip with the side thigh plate guards is SO fragile. The left side broke after the second transformation. However some super glue and a LOT of patience will fix it. The makers should have it a more solid one piece for the entire hip. The horizontal and vertical stabilizers are too flimsy in fighter jet the way they fold into the legs in robot mode. Save your money till they fix these design issues.

Feels flimsy about the leg fins, and a lot of parts shifting. But otherwise love it, it's awesome and I've put it on the shelf with the rest of my small collection of Acid Storm figures.

Nothing really new here but the figure does look really good. Came with some effect parts for the weapons and the wing fillers. All in all nice!!

Finally, something new from Maketoys. The quality is decent, all the joints are tight, feels similar to the first run of Meteor. The finish is eye catching, always nice to see bright colors that stand out on the shelf. The accessories are nice, nothing feels cheap.
Has a tiny blemish on the waist area, but it can be fixed. There were also no instructions, which is odd, but not the end of the world. Looking forward to more seekers from this company.

Same great quality as my MTRM-11, such a great aesthetic; I'd love to have an entire set these Seekers. The blast effect is green, which is a lot better than the pink shown in some images for this figure.

So finally Maketoys released their version of acid storm cause I was afraid of it being another fan funded release. I missed out on sun storm and I hope and prey they release him. But back to acid swarm heâ€™s amazing!!! My copy had no issues paint is fantastic definitely recommend that you guys get yourself a copy. The only negative thing I can say is that mines came without instructions other than that Iâ€™m satisfied specially with all the new additions it comes with makes it that much more better. Now Iâ€™m looking forward to their last two cone heads and please Maketoys letâ€™s get more color variations released. And like always thank you Tfsource for the great service â­ï¸â­ï¸â­ï¸â­ï¸â­ï¸.

After collecting third party for a while, it's crazy to see the difference in quality of some if these companies. The plastic feels totally different from other companies. It seems like stuff is missing from the blister package. There are no instructions either. Companies like FANS TOYS really set the bar. Won't be buying any more of these Seekers at all